Memorial Day weekend serves as the unofficial beginning of the U.S. summer driving season, when increased vehicle travel leads to more demand for gasoline. The American Automobile Association (AAA) expects more than 37 million people to take trips this Memorial Day weekend, traveling 50 miles or more from home between May 27 and May 31. This total marks a 60% increase from 2020, when only 23 million people traveled, the fewest since AAA began recording in 2000. The U.S. average retail price for regular gasoline on May 24, the Monday before the Memorial Day weekend, was $3.02 per gallon (gal), a decrease of 1 cent/gal over the previous week (the highest price since 2014), $1.14/gal higher than in 2020, and 38 cents/gal higher than the 2015–19 average. 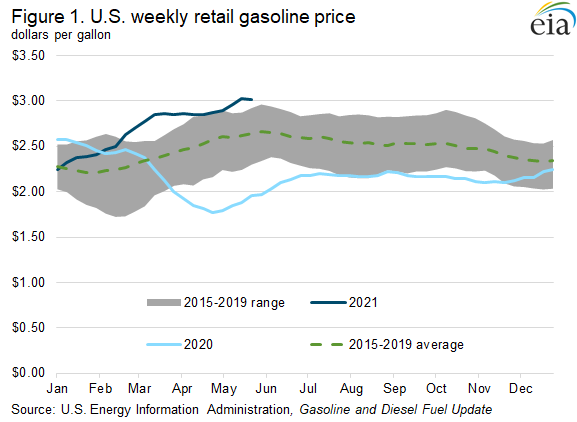 According to our Weekly Petroleum Status Report, the rolling four-week average demand for motor gasoline (measured as product supplied) dropped to historic lows in April 2020 (Figure 2). In the week before Memorial Day 2020, gasoline demand was 7.0 million barrels per day (b/d), compared with an average of 9.5 million b/d for the same week for 2015–19. In 2021, fewer restrictions on travel and economic recovery have contributed to increasing gasoline demand, largely beginning in March and continuing through April and May. The four-week average demand for gasoline increased 13% between the end of February 2021 and the end of April 2021.
As of May 21, weekly demand of total motor gasoline was 9.5 million b/d, up 2.5 million b/d compared with the four-week average from the same time last year. Gasoline demand remains 37,000 b/d below the 2015–19 seasonal average. Although AAA expects substantially more travel this Memorial Day than in 2020, its estimate is still about 6 million fewer drivers than in 2019. 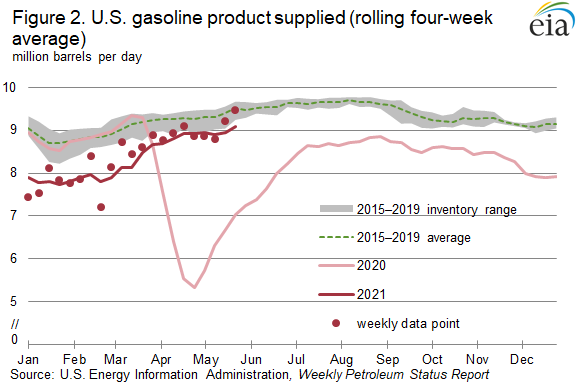 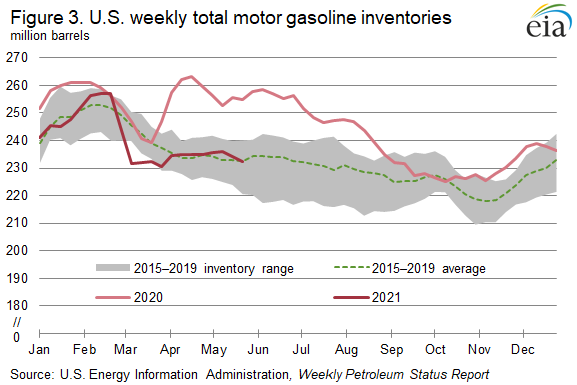 Low gasoline inventories amid increasing demand have contributed to upward pressure on gasoline prices, and regional gasoline crack spreads, an approximation of the profitability of refinery gasoline production, have increased to levels consistently above the seasonal average. The gasoline crack spread is calculated by subtracting the price of a barrel of crude oil from the price of a barrel of gasoline. Monthly average gasoline crack spreads at Chicago and the U.S. Gulf Coast exceeded 2020 levels as well as the 2015–19 average in February, March, and April, and are on track to do so in May. New York Harbor monthly average crack spreads have increased above 2020 levels as well as the previous five-year highs (2015–19) for each month since February. High gasoline prices and crack spreads in the United States contributed to increased imports of finished gasoline and motor gasoline blending components since February, particularly to the East Coast from Europe, as the relatively rapid pace of increasing gasoline demand outpaced the domestic supply.

The unexpected closure of Colonial Pipeline in early May further contributed to reductions in regional gasoline inventories along the East Coast, the largest U.S. gasoline market. Fuel shortages at retail stations and at terminals that normally rely on the pipeline increased regional gasoline prices while also preventing Gulf Coast refiners from increasing production to supply East Coast demand.

In our May Short-Term Energy Outlook (STEO), we expect wholesale U.S. gasoline prices to reach their highest monthly averages for 2021 in May. Prices will decrease gradually during the summer and through the rest of the year as crude oil prices decrease in response to increased crude oil production from OPEC+ countries. Lower crude oil prices and increased gasoline production will put downward pressure on gasoline prices amid sustained demand, which we also expect to continue increasing through August.

Effects from the Colonial Pipeline outage are not reflected in the May STEO, but they will be included in the June STEO (scheduled for release on June 8).