Annual U.S. ethane consumption has increased every year since 2008 because demand for ethane as a petrochemical feedstock has been growing, and we expect this trend to continue through 2022, according to our mid-February winter storm. Although most of the ethylene crackers used to process ethane came back online by mid-March, some remained offline through the end of the month and into the first week of April because the cold weather had severely damaged the facilities. 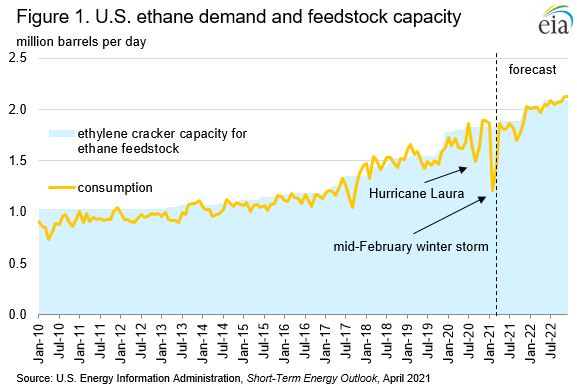 Hydrocarbon gas liquids (HGLs), which include ethane, have been primarily driving U.S. petroleum and other liquids demand growth since 2007, and exports of ethane and other HGLs have also increased since 2007. Ethane is mainly used as a petrochemical feedstock to produce ethylene, which is used to make plastics and resins. When ethylene is produced using an ethylene cracker, ethane is fed into a steam cracker that heats the ethane to break down (or crack) the molecule into ethylene, along with some co-products that are also produced from the cracking process.

The winter storm brought freezing temperatures to the Gulf Coast, where about 90% of ethane is consumed in the United States, and many of the crackers were damaged. When natural gas plant production came back online, and ethane production resumed, many of the crackers were still offline. Similar drops in supply typically occur when a hurricane hits the U.S. Gulf Coast. When Hurricane Laura made landfall at the end of August 2020, it caused ethane consumption to drop 240,000 b/d in September 2020 (or 7%) as a result of outages at several crackers in Texas and Louisiana. The mid-February winter storm reduced U.S. ethane consumption nearly three times more than Hurricane Laura, which was previously the largest one-month drop in ethane consumption on record.

Most of the crackers in the Gulf Coast came back online after the February 2021 storm at various times throughout March, but some were still offline until early April. In our April STEO, in advance of available March data, we are estimating that ethane consumption in March returned to average levels but remained 415,000 b/d below January’s level of 1.87 million b/d. We expect three newly constructed ethylene crackers to come online by the end of the forecast period, which is reflected in our estimate that consumption will grow to more than 2.0 million b/d at the end of 2021 and 2.1 million b/d by the end of 2022. Two of the crackers, one a joint venture with Total, Borealis, and NOVA Chemicals and the other a joint venture with ExxonMobil and SABIC, will be in Texas, and the third, owned by Shell, will be located in Pennsylvania.

Demand for ethylene has been growing due to its relatively low cost and to heightened demand for its end uses. Ethylene’s end uses vary from plastic bottles and lubricants to automobile interiors and antifreeze. In the United States, the supply chain is integrated, so a short-term shortage in ethylene and its derivative products in February, due to the winter storm, led to shutdowns in auto manufacturing in North America because parts made from ethylene-derived materials were in short supply. Ethylene-derived materials are also used to manufacture some personal protective equipment, which saw a spike in demand because of the COVID-19 pandemic, and is facing similar supply chain disruptions.

Ethane spot prices are associated more with natural gas than crude oil, making it the cheaper feedstock compared to naphtha, while naphtha is associated more with crude oil along with the other heavier products like butanes and natural gasoline. Ethane spot prices have been consistently lower than naphtha spot prices (Figure 2). Spot prices of naphtha haven’t gone above $2.00 per gallon (gal) since 2014 when measured as a monthly average. Ethane, on the other hand, has stayed below $1.00/gal for the past decade. Although naphtha is the more expensive feedstock for petrochemical cracking, it may yield co-product that generates additional value to producers that is not reflected in Figure 2. 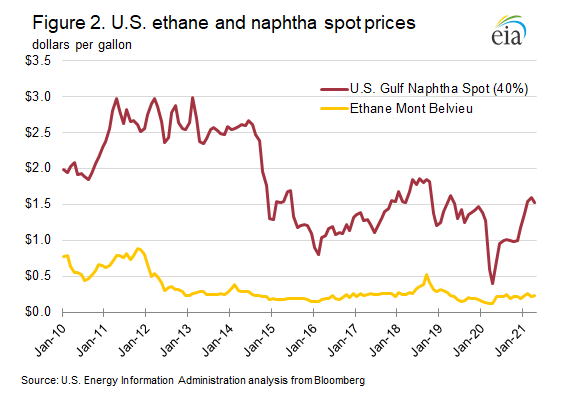 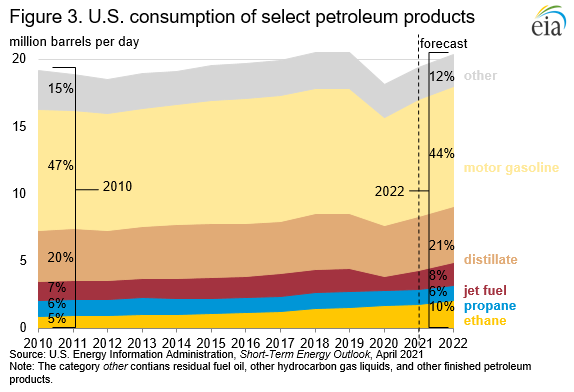 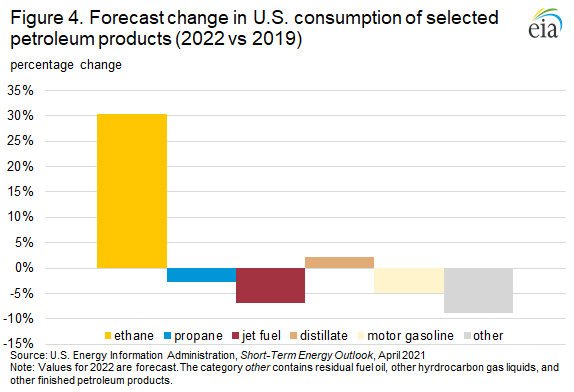