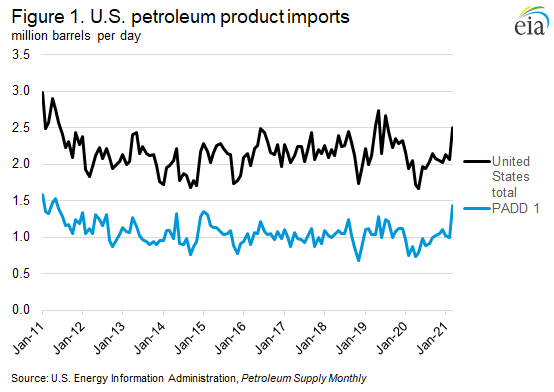 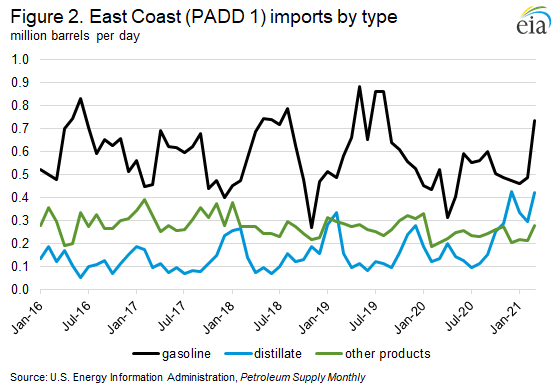 The increase in petroleum product imports into the United States has been due, in part, to short-term factors such as reduced domestic supply, increased domestic demand, and low gasoline inventories. The extreme winter weather in February 2021 disrupted operations at several refineries in the U.S. Gulf Coast, where more than half of total U.S. refinery capacity is located, and particularly in Texas, where 5.9 million b/d (approximately 31%) of capacity is located. Meanwhile, U.S. gasoline consumption increased to 8.6 million b/d in March, the highest level since February 2020 and only 7% lower than the March 2019 level of 9.2 million b/d. Distillate consumption also increased in March to 4.0 million b/d, the highest level since November 2019 and only 4% less than the March 2019 level of 4.2 million b/d. Because gasoline inventories have also been low, the United States likely relied more than usual on gasoline imports to meet rising demand. 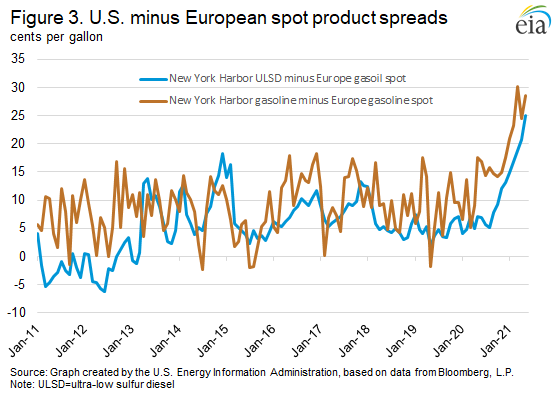 The increase in petroleum product imports is also a result of reduced refining capacity in the East Coast after the 335,000 b/d Philadelphia Energy Solutions (PES) refinery closed in June 2019. We estimated that closing the Philadelphia refinery would reduce East Coast gasoline supplies by approximately 160,000 b/d and distillate supplies by approximately 100,000 b/d. Prior to the PES refinery closure, East Coast gross inputs into refineries exceeded 1.0 million b/d most months, but following the closure, inputs to refineries have been much lower (Figure 4). From July 2019 to December 2019, the first six months after the PES refinery closed, East Coast gross inputs to refineries averaged 821,000 b/d. In the past 12 months of complete data (April 2020–March 2021), reduced refinery utilization of other East Coast refiners in response to the COVID-19 pandemic has contributed to the decrease in East Coast refining. Because the East Coast consumes significantly more petroleum products than regional refineries produce, the region relies on imports and supplies from the U.S. Gulf Coast via pipeline. When production is disrupted in the U.S. Gulf Coast (as was the case in February and March 2021), the East Coast relies more on imports to meet its petroleum product demand. 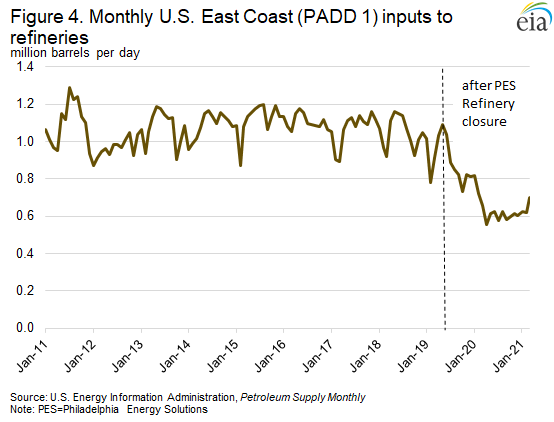