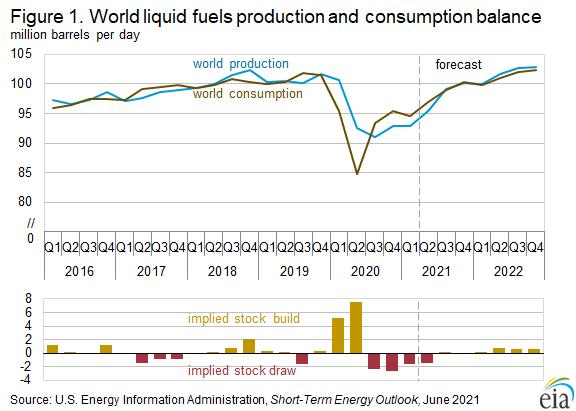 Our forecast has several notable risks. Relatively high crude oil prices over the next several months may encourage individual OPEC+ members to increase production more than stipulated by the current OPEC+ agreement. We forecast that Brent crude oil prices will average $69 per barrel (b) each month from June through August before declining to $64/b in December, and we expect WTI to average $66/b from June through August before declining to $61/b in December (Figure 2). In addition, our current forecast assumes that crude oil production in Iran will continue to increase this year. Even though sanctions that target Iran’s crude oil exports remain in place, crude oil exports from Iran have been rising since the end of 2020, driving up crude oil production, and may increase faster than we previously expected. 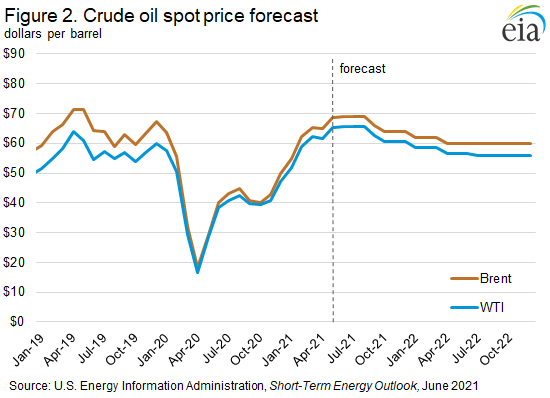 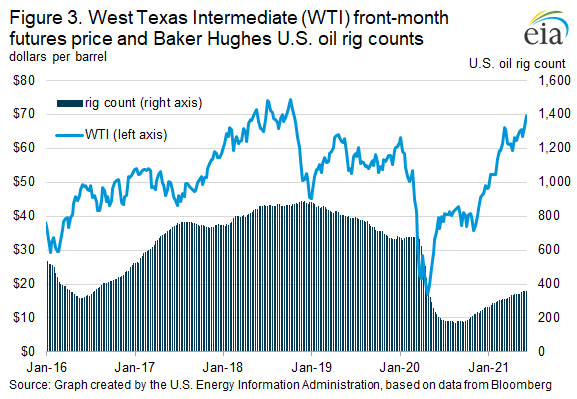 We expect that the U.S. crude oil-directed rig count is likely to continue rising in response to the WTI crude oil price, which reached a monthly average of $65/b in May and we forecast will remain above $65/b through August 2021. Changes in rig counts typically lag changes in the WTI price by three to six months, and production changes typically occur about two months after rig deployment. Assuming that other factors remain constant, recent crude oil price increases will likely continue to drive rig deployments through much of the rest of 2021. However, the recent changes in rig counts indicate operators, notably in the Permian region, could add fewer rigs at current crude oil prices than they previously added when prices were at similar levels. In the forecast, we have slightly adjusted the responsiveness of rig deployments in the Permian region to upward crude oil price movements.

Although U.S. crude oil producers have some incentive to remain cautious about deploying rigs and increasing production because of overall market uncertainty, if WTI crude oil prices remain near $65/b in the coming months, as we forecast, prices will continue to encourage producers to deploy additional rigs and increase production. Onshore U.S. crude oil production in the Lower 48 states during May 2021 averaged 8.9 million b/d, and we expect production to reach almost 9.3 million b/d by December 2021 with further increases into 2022.

The effects of higher crude oil prices and planned OPEC+ production increases contribute to our forecast that global petroleum supply will increase over the next several months, resulting in an essentially balanced market in the second half of 2021. We expect global stock builds in each quarter in 2022. Based on this global supply and demand forecast, we expect that the Brent crude oil price will stay near current levels for most of 3Q21, fall to $64/b in 4Q21, and decline further to average $60/b in 2022. However, the degree of adherence to the current OPEC+ production agreement and the volume of crude oil entering the market from Iran could push prices higher or lower. Similarly, if U.S. operators add fewer drilling rigs than expected, the result would be lower U.S. crude oil production in 2022, which would also affect prices.