We forecast U.S. ethane exports to reach record highs in 2021, extending the trend of consistently rising exports of ethane and associated ethylene and ethylene derivatives since 2014. As one of only two countries with substantial ethane production capacity and export capability, the United States is positioned as both the largest global ethane consumer and exporter. The ability to produce ethane at low cost relative to other feedstocks used in the petrochemical industry has provided U.S. petrochemical manufacturers with a competitive advantage on the international market, allowing exports of products derived from ethane to grow. International chemical manufacturers are increasing their imports of ethane from the United States to take advantage of this low-cost feedstock.

Ethane is used primarily as a petrochemical feedstock, which means it is fed into ethylene crackers and heated to temperatures between 1,450°F–1,600°F to break the ethane molecule down into ethylene. Ethylene is further processed to create derivatives such as polyvinyl chloride (PVC) and ethylene glycol (EG), but the most common process is polymerization to make polyethylene (PE), a common base component of plastics.

The United States produces, consumes, and exports all aspects of the ethane value chain (which includes ethane, ethylene, polyethylene, and other ethylene derivatives). We publish data on ethane, including consumption, production, and exports. The U.S. Census Bureau publishes exports data for non-energy products derived from ethane.

U.S. exports of ethane began in 2014, when the first export pipelines for ethane were completed and shipping to petrochemical plants in Canada began. Since then, operators have added more ethane export capacity, including three marine export terminals that ship cryogenically cooled ethane overseas in specially built tankers. Beginning in 2016, U.S. ethane exports increased due to the new capacity to ship ethane overseas to crackers in Europe. By 2018, the United States was exporting to six countries that had infrastructure to import cryogenically-cooled ethane at coastal terminals connected to ethylene crackers. U.S. ethane exports to China began in mid-2019 and averaged approximately 20,000 b/d though the end of 2020. In January 2021 a third export terminal began operations at Nederland, Texas, which increased U.S. capacity for waterborne exports by 170,000 barrels per day (b/d). In the June Short-Term Energy Outlook, we forecast ethane exports to reach 373,000 b/d in 2021 and 447,000 b/d in 2022 (Figure 1). Specially built tankers carry exported ethane that is cryogenically cooled to -128°F so it can be transported as a liquid. The number and capacity of vessels calling on U.S. ports is growing in step with increasing ethane export demand. 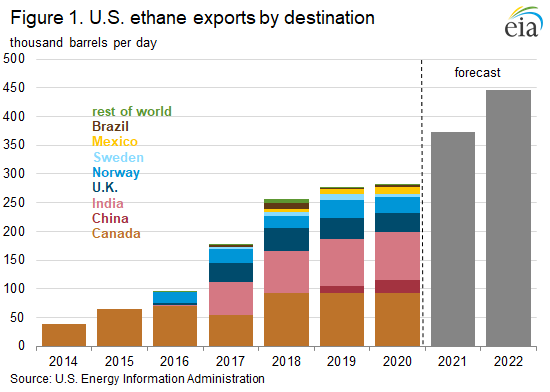 Ethane accounts for over 13% of the total volume of U.S. exports of ethane and ethane-derived chemicals, and exports of ethylene and ethylene derivatives make up the rest of the ethane value chain exports. Ethylene exports, which had been relatively flat over the previous five years, grew by 139% between 2019 and 2020, reaching 5% of total ethane-related chemicals exports (Figure 2). Prior to 2020, all U.S. ethylene exports moved through a terminal in Galena Park, Texas. In early 2020, a second, higher capacity ethylene export terminal began operations out of Morgan’s Point, Texas. Both terminals are on the Houston Ship Channel. 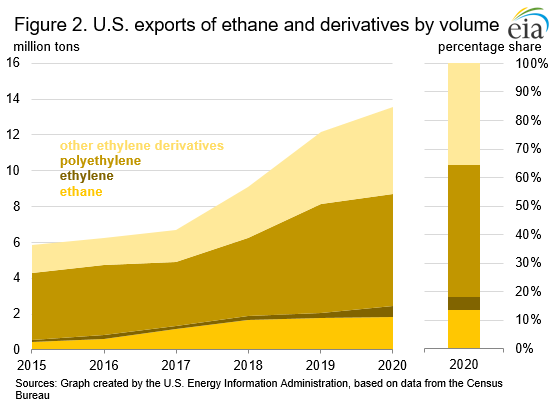 Unlike ethane and ethylene, which are exported as cryogenically refrigerated liquids on tankers from purpose-built terminals, polyethylene and other ethylene derivatives can be exported through any port or overland route capable of handling containerized traffic. The U.S. Census Bureau reports that approximately 24% of ethylene derivatives were exported out of just two customs districts, Houston-Galveston district district and Laredo, which are both close to the main ethylene production areas in Texas.

Exports of ethylene-derived polyethylene and other value-added products account for a greater value share of exports than volume does. As a share of value, ethane accounts for more than 9% of the total. Polyethylene accounts for 48% of the value across the ethane export value chain and 46% of volume (Figure 3). Similarly, other ethylene derivatives are considered higher-valued, semi-finished products and make up the remaining 39% of the ethane export value chain despite only representing 36% of the volume. 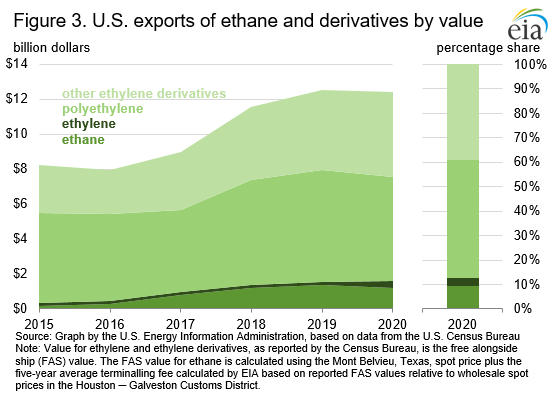 The destinations of ethane and ethane-derived chemicals depends on the product. Although only 8 countries import U.S. ethane, more than 100 countries import U.S. ethylene and ethylene derivatives. In 2020, ethylene was predominantly exported to Taiwan (39%), China (36%), Indonesia (11%), Belgium (8%), and Colombia (2%) (Figure 4). Canada and Mexico, which can import ethylene derivatives by land, tend to import more ethylene derivatives that way because it is less costly than waterborne exports. In addition, Canada and Mexico do not impose tariffs on imports from the United States because of reciprocal free trade agreements. Combined, 31% of U.S. polyethylene exports went to Canada and Mexico in 2020, while 14% went to China and 6% to Brazil. From 2015 to 2020, U.S. exports to Canada and Mexico, where the market has been relatively flat, have declined as a share of the total (Figure 4). Exports to Asia and Europe have nearly tripled over that period, and in 2020, those regions accounted for 42% of the total share of all U.S. polyethylene exports. Exports of other ethylene derivatives to Asia have also grown, increasing 487% between 2015 and 2020 compared with 35% growth to Canada and Mexico. In 2020, Malaysia was the largest destination for these exports, accounting for 12% of the total, followed by Belgium (11%), Singapore (9%), China (8%), and Brazil (8%). 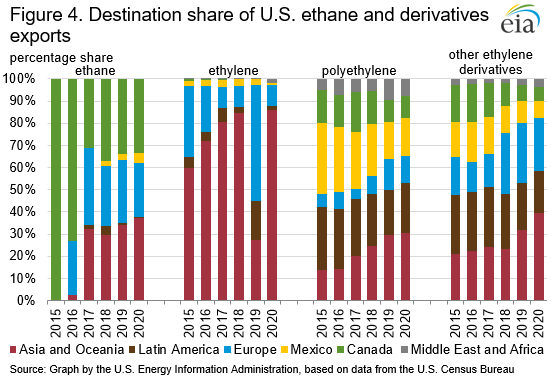 Although ethylene derivatives make up the bulk of ethane exports by volume and by value, ethane exports as a whole are growing as global petrochemical manufacturers find ethane’s low cost as a feedstock attractive for manufacturing value-added products. Until the United States became a major ethane exporter in 2016, only a few countries had sufficient natural resources and midstream infrastructure to use ethane as a petrochemical feedstock. Across most of Asia and Europe, naphtha serves as the primary petrochemical feedstock, followed by propane and normal butane. Although more expensive than ethane, these feedstocks, when processed in a petrochemical cracker, yield other products that may be more valuable than ethylene. According to the America Chemistry Council, ethane, the lightest feedstock, yields the most ethylene from a cracker at about 80%, and the rest are coproducts such as methane, hydrogen, and propylene. Propane and normal butane, which are heavier, yield more propylene and butylene and about half as much ethylene compared with using ethane feedstock. Naphtha feedstock, an even heavier hydrocarbon associated more with crude oil than with natural gas, yields even less ethylene at about 32% on average.

The decision to use ethane rather than other feedstocks depends on a number of factors, including whether a petrochemical cracker has the capacity to switch. Most crackers have some flexibility, although generally a plant built to use naphtha as a feedstock has only limited capacity to consume lighter feedstocks because it may not have a furnace that can reach the higher required temperatures or because it may not have the capacity to accommodate the different product yield. In addition to the physical limitations of the plant, economic considerations are a factor. Although all crackers are referred to as ethylene crackers, those using naphtha as a feedstock, in fact, yield more coproducts than ethylene. The value of these coproducts may generate additional value to the operators, offsetting the use of higher-cost naphtha to produce ethylene. The ethylene margin from petrochemical ethylene production is, therefore, the cost of feedstock on one side of the balance sheet and the revenue generated by the produced ethylene and coproducts on the other.

In the United States, cracking ethane for ethylene production has consistently generated a higher margin, averaging 17.5 cents per pound from the beginning of 2015 through April 2021, or almost twice as high as the margin from cracking naphtha (Figure 5). This trend has resulted in U.S. ethylene prices declining significantly below ethylene spot prices overseas. Except for during the first quarter of 2021, when U.S. ethylene production was severely curtailed due to impacts of a mid-February winter storm on the Gulf Coast, U.S. ethylene prices have been, on average, 45% lower than ethylene prices in Western Europe and East Asia. Even during the rapid price increases reported in the second half of 2020, when various COVID-19 mitigation measures resulted in strong demand for plastics and resins for consumer goods and personal protective equipment, U.S. spot prices remained discounted relative to international ethylene prices by 38% on average. This discount has provided U.S. manufacturers of ethylene derivatives with a long-term cost advantage that has resulted in expanding manufacturing capacity along the U.S. Gulf Coast and in strong ethane export growth. 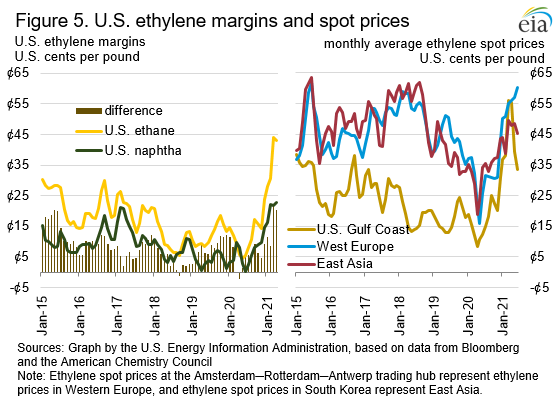 Global petrochemical manufacturers hoping to capture the cost advantage of cracking ethane to produce ethylene are developing new petrochemical crackers and associated infrastructure to import and process ethane from the United States. We expect projects currently in the construction and commissioning phases to generate an additional 166,000 b/d of ethane exports through the end of 2022 over 2020 levels. U.S. ethane exports growth beyond 2022 will depend on the long-term expectations for ethane’s continuing price competitiveness relative to heavier feedstocks and the ability of U.S. producers to extract higher volumes of ethane from the natural gas stream.