In the July Short-Term Energy Outlook (STEO), we revised our forecast crude oil prices up in the second half of 2021 (2H21) and in 2022. We forecast that the Brent crude oil price will average $72 per barrel (b) in 2H21 and $67/b in 2022, each up $6/b from the June STEO forecast (Figure 1). Our expectation of tighter global oil markets contributed to our upward revision of crude oil prices. We revised global production down by 210,000 barrels per day (b/d) in 2H21, leading to larger forecast inventory draws in 2H21 and smaller forecast inventory builds in 2022. We completed our forecast on July 1, before the July 2 meeting between members of OPEC and several nonmembers (OPEC+). Participants at the meeting did not reach an agreement on oil production levels and were scheduled to reconvene on July 5; however, that meeting was subsequently canceled. After OPEC+ countries could not reach an agreement, Brent crude oil prices rose, increasing to $78/b in intraday trading on July 6, the highest price since October 29, 2018. As of July 7, members of OPEC+ had still not reached a production agreement, and the price of Brent fell, closing at $73/b as future production levels remained unknown. The uncertainty over future crude oil supply led to an increase in volatility on July 7. In the July STEO, we forecast that OPEC and its OPEC+ partners will continue to increase crude oil production beyond July in response to rising global oil consumption. 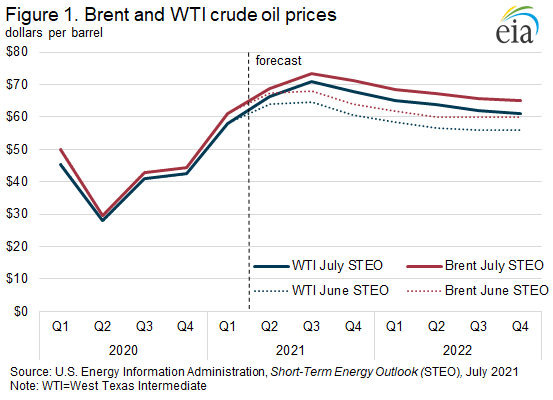 Brent crude oil prices averaged $73/b in June 2021, up $5/b from May. June was the first month when Brent crude oil prices averaged more than $70/b since May 2019. This increase likely reflected market expectations of continuing near-term tightness in global oil markets as global oil inventories continued to decline. In the July STEO, we forecast that the Brent crude oil price will average $73/b in the third quarter of 2021 (3Q21), up from $68/b in the June STEO. We expect moderate downward oil price pressures will emerge beginning in 2H21, when we forecast that global oil production will rise, causing inventories to draw at a slower pace. We expect Brent spot prices will fall in 4Q21 to average $71/b. We also expect West Texas Intermediate (WTI) prices will follow a similar path, averaging $71/b in 3Q21 and $68/b in 4Q21, up from the June forecast of $65/b and $61/b, respectively.

Although we expect that global markets will be tighter than in the previous forecast, we expect smaller stock draws in 2H21 compared with 1H21, and we expect stock builds in 2022 will continue to put moderate downward pressure on oil prices. In the July STEO, we forecast that the Brent crude oil price will fall from an average of $69/b in 2021 to $67/b in 2022 and that WTI prices will fall from $66/b in 2021 to $63/b in 2022.

In the July STEO, we forecast implied global stock draws (the difference between consumption and production) of 210,000 b/d in 2H21, up from an average stock draw of 20,000 b/d in last month’s forecast but less than the draw of 1.7 million b/d in 1H21. We expect implied stock builds in 2022 will average 460,000 b/d, down from 510,000 b/d in last month’s forecast (Figure 2). The forecast changes in stock draws and builds were driven by downward revisions to global production that were larger than the downward revisions to global consumption. 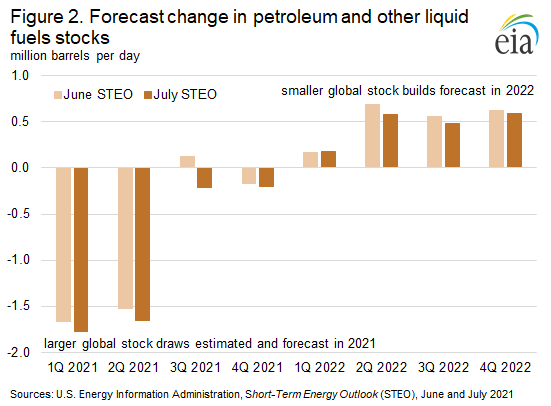 Data on global petroleum inventories are not collected directly, but these values are implied based on the difference between forecast world production and world consumption. For the United States and for countries in the OECD, however, historical inventory estimates are available and can indicate global trends. Because of fluctuations in consumption, inventory levels expressed in terms of days of supply can provide additional insight compared with inventory levels expressed in barrels. In the July STEO, we forecast that the OECD inventory in terms of days of supply will fall from the highs caused by the COVID-19 pandemic in 2Q20 and will be below the previous five-year (2016–20) average from 2Q21 to 3Q22. In 4Q22, we forecast that the days of supply will be slightly higher than the previous five-year average (Figure 3). The relatively low inventory levels reflect the implied inventory changes shown in Figure 2. 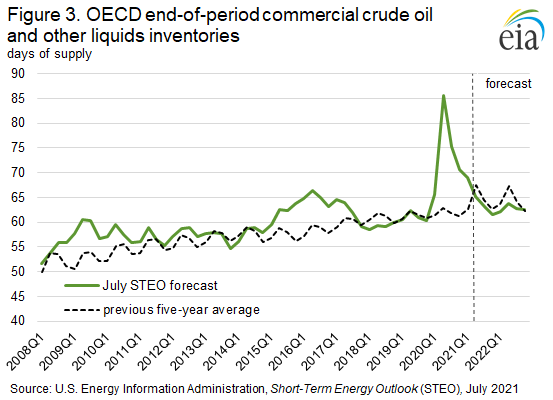 In the July STEO, we forecast that OPEC crude oil production will increase from 32.1 million b/d in 2021 to 34.1 million b/d in 2022, which is down 40,000 b/d from the June STEO. We forecast that OPEC will continue to increase crude oil production beyond July in response to rising global oil consumption. Although our forecast assumes current U.S. sanctions remain in place for Iran and Venezuela for the entire forecast period, we expect Iran will increase crude oil supply somewhat in the coming months. We also expect that OPEC+ will not implement further production cuts to accommodate any potential increases in oil output from Iran or Venezuela.