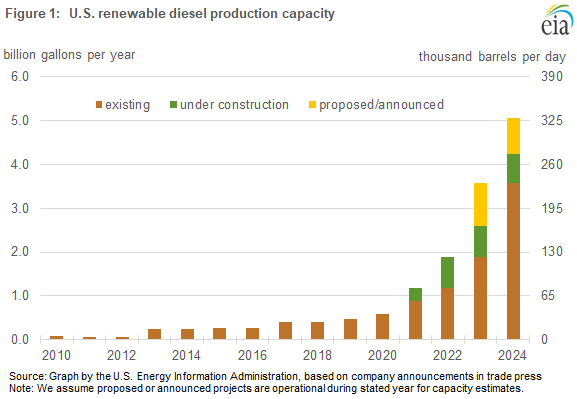 One such refinery is Marathon Petroleum’s refinery in Martinez, California. Since closing the facility in 2020, Marathon has announced that it will begin converting the refinery to produce renewable diesel. Marathon expects the facility will start producing renewable diesel in 2022 and will reach its full production capacity of 730 million gal/y (48,000 b/d) in 2023.

The Phillips 66 refinery in Rodeo, California, is also undergoing reconfiguration. The Phillips 66 Rodeo Renewed project would produce 800 million gal/y (52,000 b/d) of renewable fuels when completely converted, making it the world’s largest facility of its kind. Phillips 66 has already completed its initial diesel hydrotreater conversion and begun producing renewable diesel. It expects to complete the second phase of the conversion by 2024. 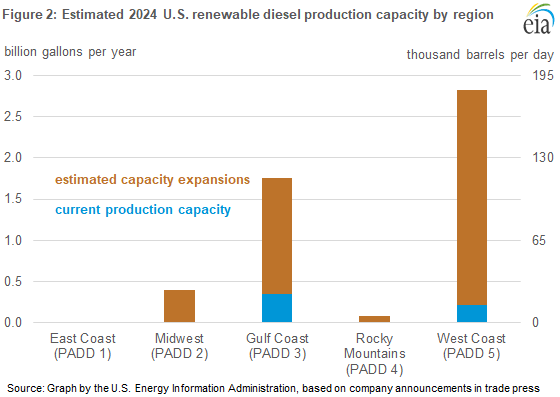 To date in 2021, these feedstocks have faced lower supply and higher demand, leading to sharp increases in agricultural commodity prices and prices of renewable identification number (RIN) credits for RFS compliance. RIN prices reached record highs earlier this year. Due to these high feedstock costs, to remain profitable and compete with petroleum diesel, renewable diesel and biodiesel producers have been relying heavily on incentives such as the biomass-based diesel tax credit and high tradeable credit prices for renewable diesel in the RFS and LCFS. Feedstock availability and government incentives will likely continue to play a large role in the financial viability of new renewable diesel production capacity in the near term.