By admin In Chemical Industry On August 5, 2021

The average regular retail gasoline price in the Rocky Mountain region (PADD 4) was $3.64 per gallon (gal) on August 2, 2021, up $1.27/gal from a year ago and 48 cents/gal higher than the U.S. average price. For each week since July 12, 2021, the Rocky Mountain price has reached record-high differences in nominal gasoline prices compared with the U.S. average, according to our 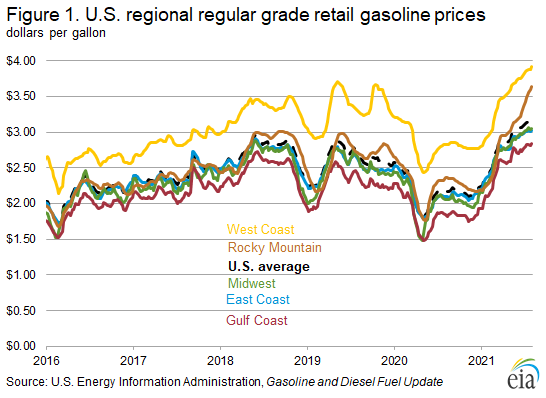 Although many factors contribute to regional differences in retail gasoline prices, refinery closures in the West Coast and Rocky Mountain regions in the past year may be contributing to low refinery output of gasoline and the resulting low inventories, which contributes to higher prices. In addition, both the Rocky Mountain and West Coast regions have been operating at reduced refinery utilization this summer compared with average summer rates—another factor limiting gasoline production and affecting prices.

Amid reduced refinery capacity and utilization, U.S. gasoline demand (measured as product supplied) this year has mostly returned to historical summer levels, averaging only 3% lower than demand in 2019, based on average U.S. product supplied from the first week in June through the last week in July. We will release PADD-level product supplied data in the Google Mobility, which has shown less time spent at home and increases in visits to other destinations. Another sign of increased driving, particularly in the Rocky Mountain region, is higher numbers of visitors to national parks. According to the National Park Service, visitors to Yellowstone National Park, Zion National Park, and Rocky Mountain National Park from January through June 2021 range from 8% to 26% higher than during the same period in 2019.

Unlike other regions in the United States, the Rocky Mountain region produces almost all of the gasoline it consumes, with little flows to or from other U.S. regions and few imports. The region had 16 refineries until mid-2020, when HollyFrontier announced it was closing its refinery in Cheyenne, Wyoming, which had a capacity of 48,000 barrels per day (b/d), or 7% of the region’s total refining capacity. They are converting the refinery to renewable fuels production, but the immediate termination of traditional petroleum fuels production has contributed to comparatively low gasoline inventories for this time of year. As of July 30, total motor gasoline inventories in the Rocky Mountain region were 6.1 million barrels, 15% lower than the five-year (2016–20) average (Figure 2). On July 16, Rocky Mountain total gasoline inventories were less than 5.8 million barrels, the lowest level for any week since June 7, 2013. 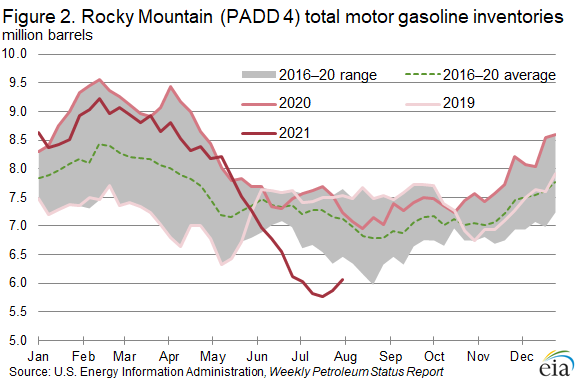 The West Coast region also produces most of the gasoline it consumes. During periods of constrained gasoline supply, such as during the Torrance refinery outage in 2015 and several refinery disruptions in 2019, the West Coast region can significantly increase its motor gasoline imports. The closure of the 161,000 b/d Marathon Martinez refinery in California in mid-2020 (also currently being converted to renewable fuels production) may also be affecting gasoline supplies, inventories, and prices. Refinery utilization is also unseasonably low, averaging 87% from the first week in June through the last week in July, compared with an average of 94% over the same period in 2019. In addition to the loss of refining capacity and low utilization, trade press has recently reported some logistical constraints developing in the West Coast region as a result of pipeline testing, which is reducing flows of finished products and affecting customer deliveries. As a result of these constraints, West Coast imports of motor gasoline have increased, reaching a high of 270,000 b/d the week of July 2, the second-highest import volume for any week in EIA data, which dates back to 2004 (Figure 3). Weekly import data show that from the first week in April through July 30, West Coast motor gasoline imports averaged 96,000 b/d. If confirmed in monthly data, this total would represent the third-highest import volume for the April–July period in EIA data, which dates back to 1981. 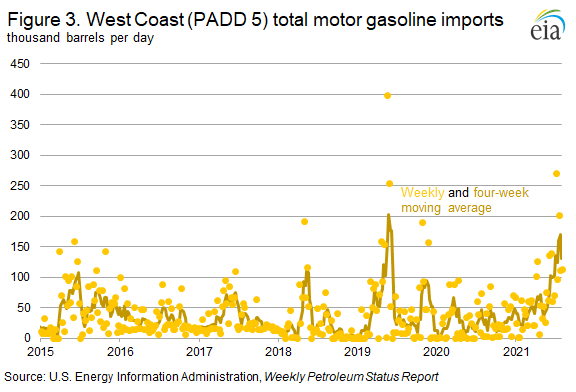 Aside from the Martinez refinery, Phillips 66 announced plans to stop refining petroleum at its 120,200 b/d Rodeo refinery in California while it transitions to renewable fuels. The refinery had not terminated its petroleum refining operations as of January 1, 2021, (which is reflected in our latest