In the August Short-Term Energy Outlook (STEO), we forecast larger than previously expected world petroleum inventory draws in 2021 and larger inventory builds in 2022. The changes are driven mostly by forecast changes to production from OPEC and Russia as a result of the most recent OPEC+ agreement. Concerns about decreased demand because of increasing COVID-19 cases have recently driven crude oil prices down, which has offset some initial price increases due to larger inventory draws. As a result, our crude oil price forecast remains mostly unchanged from the July STEO. However, we have revised down our forecast for total world petroleum production. 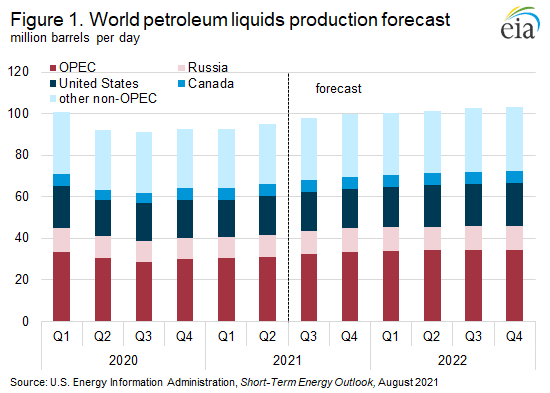 On July 18, OPEC+, which includes OPEC and several non-OPEC members (including Russia), agreed to increase monthly crude oil production starting in August 2021. In early July, members of OPEC+ adjourned without reaching a new crude oil production agreement. Negotiations stalled because of disagreements between Saudi Arabia and the United Arab Emirates (UAE) on the baseline levels against which the members’ production cuts should be measured. In the deal announced on July 18, OPEC+ members agreed to increase production by 400,000 b/d each month starting in August 2021. This agreement is in addition to production increases that already took place through July 2021, including the full reversal of Saudi Arabia’s voluntary production cut of an additional 1 million b/d.

The latest agreement calls for the 400,000 b/d monthly increase to continue until the previous production cuts are fully reversed, which would occur by 3Q22 if implemented at that rate. However, OPEC+ extended the production agreement to include monthly meetings through the end of 2022 so that it can adjust production targets as necessary. The most recent agreement did not specify monthly output targets, which leaves exact implementation uncertain. OPEC+ also agreed to raise the baselines for Saudi Arabia, Russia, the UAE, Iraq, and Kuwait by a combined 1.6 million b/d starting in May 2022; however, they did not specify how they would implement the new baselines. Some countries, including Nigeria and Algeria, have requested that OPEC+ review their baselines as well.

In the August STEO, we forecast that OPEC total petroleum production will average 33.0 million b/d in 2H21, down 600,000 b/d from the July forecast for the same period (Figure 2). In the July STEO, we expected that OPEC would raise production by more than the group ultimately agreed to in order to meet global demand. We expect most OPEC countries will fully comply with the agreement during 2H21. 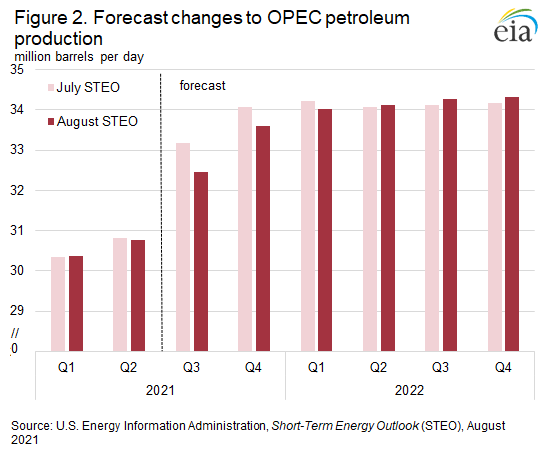 We revised our forecast for OPEC petroleum production in 2022 up by 40,000 b/d from the July STEO to average 34.2 million b/d. In 2022, we expect OPEC+ monthly production increases to total less than 400,000 b/d. This output growth is forecast to avoid oversupplying the markets and pushing down the price of crude oil. However, we expect that some countries will produce more as a result of their increased baselines starting in May 2022, including the UAE, Kuwait, and Iraq. Our forecast assumes that existing sanctions against Iran will remain in place through the end of the forecast period. However, our forecast includes rising petroleum production from Iran over that period despite sanctions remaining in place, and we assume that OPEC will not adjust production levels to accommodate this increase. 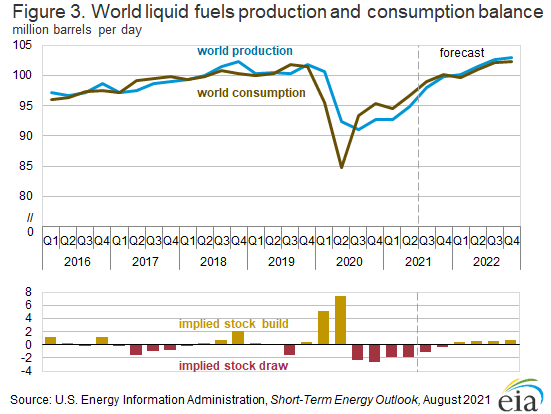 Recent crude oil price activity has been mixed in response to the OPEC+ supply agreement and renewed demand concerns, resulting in increased price volatility. Our forecast price for Brent and West Texas Intermediate (WTI) crude oil remains largely unchanged from the July STEO. In the August STEO, we expect that the price of Brent will fall less than $1 per barrel (b) in 2H21 compared with the July STEO, remaining at $72/b. The price of WTI is expected to increase by less than $1/b compared with the July STEO during the same period, remaining at $69/b. Our forecast prices for Brent and WTI in 2022 were each revised down by nearly $1/b to average $66/b and $62/b, respectively (Figure 4). 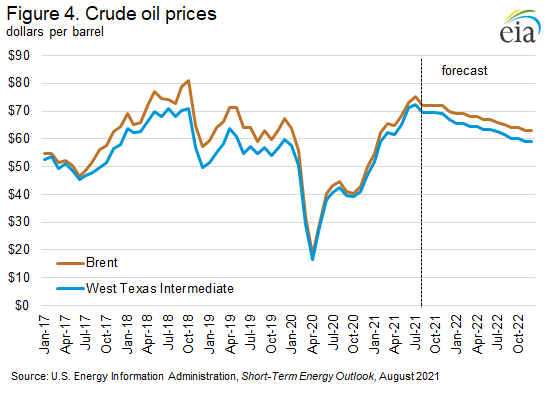