On March 29, 2021, the ICE Futures Abu Dhabi (IFAD) exchange began trading the new Murban crude oil futures contract, which may potentially serve as a benchmark crude oil contract for crude oil exports out of the Persian Gulf. The contract is based on Murban crude oil, which accounts for a significant portion of crude oil produced by the United Arab Emirates’ (UAE) state oil firm, Abu Dhabi National Oil Company (ADNOC), for delivery at the Fujairah storage hub along the Gulf of Oman. This new contract represents a potential alternative to other regional contracts, most notably the Dubai Mercantile Exchange (DME) Oman crude oil contract, as well as the Platts Dubai crude oil pricing basket. Previous attempts to establish a Middle East contract to serve as a pricing benchmark have had mixed reception compared with the major global crude oil benchmarks Brent and West Texas Intermediate (WTI), despite the important roles that Middle East crude oil producers play as major global exporters. 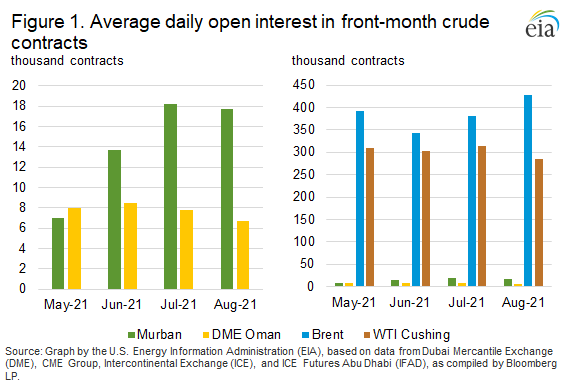 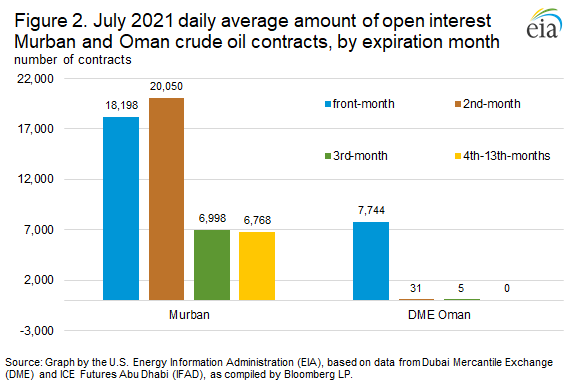 Since the IFAD Murban contract began trading at the end of March, the front-month contract has on average traded at a discount to Brent but at a premium to both WTI Cushing and DME Oman. The higher relative price compared with DME Oman is likely a product of the higher relative quality of Murban crude oil, while the price premium over WTI is likely a reflection of the Murban contract’s waterborne point of delivery. Since April 1, 2021, Murban has averaged a discount of $1.13 per barrel (b) compared with Brent, while DME Oman and WTI have averaged discounts of $1.65/b and $2.57/b, respectively (Figure 3). 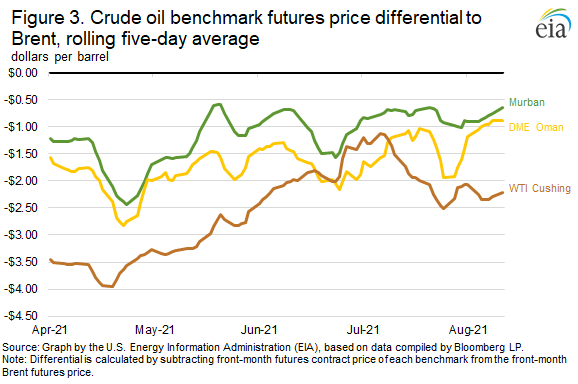 Low-density crude oils—meaning those with a higher API gravity—often receive higher prices because of their relatively higher yields of high-value products, such as jet fuel, gasoline, and light naphtha. Lower sulfur content is another major indicator of crude oil quality, as higher sulfur crude oil grades require more processing to remove excess sulfur to bring fuels into compliance with most international emissions specifications. As a result, crude oils with higher API gravity (lower density) and lower sulfur content (sweeter) are generally priced higher than crude oils with a lower API gravity (higher density) and higher sulfur content (sourer). Murban has an API of just over 40 and a sulfur content of 0.79%, making it lighter than other major benchmarks such as Brent or WTI but also slightly sourer (Figure 4). Oman crude oil is both heavier and sourer than Murban. 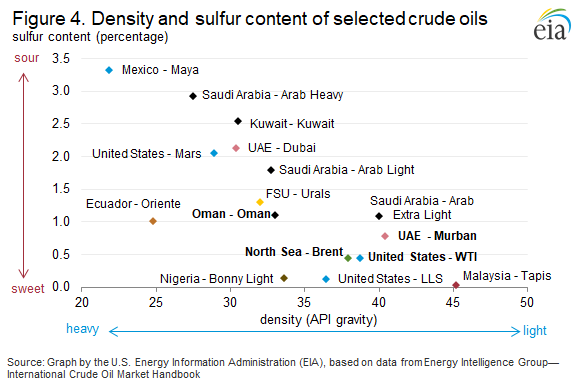 In addition to crude oil quality, point of delivery is another major contributor to crude oil benchmark pricing. For example, although the WTI benchmark crude oil is somewhat lighter than Brent crude oil, the contract is generally cheaper than Brent because it is priced at landlocked Cushing, Oklahoma, where buyers must pay to transport the crude oil to a coastal location if they intend to ship it to overseas export markets. To remain competitive with Brent, which does not require this extra transportation cost, WTI contracts are priced lower.

Murban’s primary physical delivery point is Fujairah, UAE, and delivery must be made on a free on board (f.o.b.) basis, meaning the reported price reflects the actual price paid to the seller with no adjustment for the cost of ocean freight, insurance, or credit. Fujairah is a coastal oil storage and shipping hub situated on the UAE’s coastline on the eastern side of the Strait of Hormuz, facing the Gulf of Oman (Figure 5). Ships bound for Fujairah do not need to navigate the Strait of Hormuz—a waterway subject to risks of shipping constraints—making it a more attractive shipping destination than other major oil ports in the Persian Gulf, such as Dhahran or Abu Dhabi. The DME Oman contract, which is delivered at the Mina Al Fahal Terminal near Muscat, has a similarly attractive delivery point. Fujairah is currently home to nearly 63 million barrels of petroleum storage capacity, and it is expected to increase its oil storage capacity to nearly 70 million barrels by the end of 2021; ADNOC has reportedly announced plans for continued storage capacity increases at Fujairah through 2024. 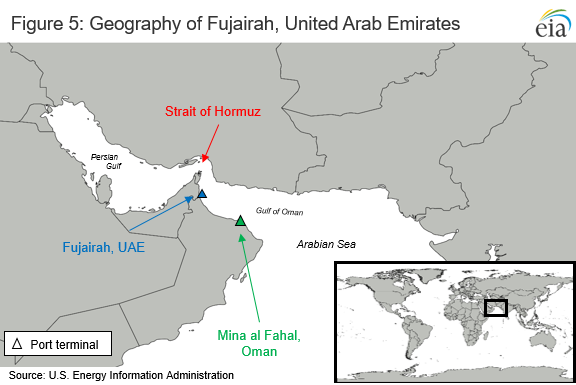 The UAE currently produces about 2 million barrels per day (b/d) of Murban crude oil, approximately half of the country’s total crude oil production, and ADNOC has committed to supply half of its Murban crude oil to Fujairah for export. Furthermore, the UAE plans to increase Murban crude oil production to 2.5 million b/d by 2030, which, if realized, will ensure that the contract is underpinned by relatively robust supply growth, helping to anchor the financial benchmark contract with the physical market for crude oil. This outcome is important to the overall viability of the contract as a financial benchmark, particularly given rising demand for crude oil from Asian countries such as China, India, and South Korea that have become the primary export market for crude oil producers in the Persian Gulf. As of 2018, the latest year for which data are available, China, India, and South Korea accounted for 35% of total world crude oil imports, and we estimate this share has since increased based on third-party import statistics for 2019 and 2020 (Figure 6). In 2020, 80% of Oman crude oil went to China, which may present a risk to DME Oman fundamentals, as the pricing of the contract may disproportionately reflect one consumer’s policies and fundamentals more than a crude oil grade like Murban, which exports to more countries in Asia. 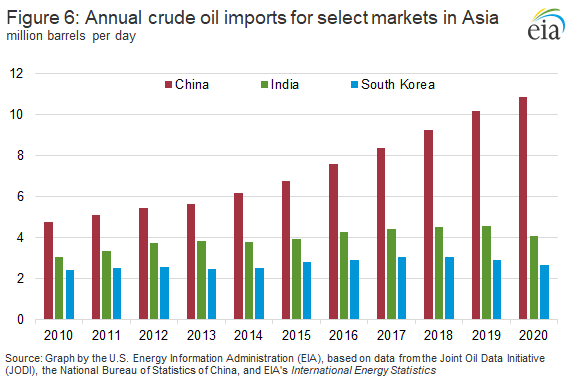