By admin In Chemical Industry On September 10, 2021

On Sunday, August 29, Hurricane Ida made landfall near Port Fourchon, Loiusiana, as a Category 4 hurricane (sustained wind speeds of 130–156 miles per hour). As a result of the hurricane, at least nine refineries (approximately 2.3 million barrels per day [b/d] of refining capacity) shut down or reduced production. In addition, 96% of the crude oil production and 94% of the natural gas production in the U.S. federally administered areas of the Gulf of Mexico (GOM) were shut in, according to estimates by the Bureau of Safety and Environmental Enforcement. Several ports along the Gulf Coast, including the Louisiana Offshore Oil Port (LOOP), were closed. As of September 8, significant levels of refining and crude oil production remain shut in. Because of the shut ins related to Hurricane Ida, in the September Short-Term Energy Outlook (STEO), we revised down U.S. crude oil production and refinery runs from the August forecast. 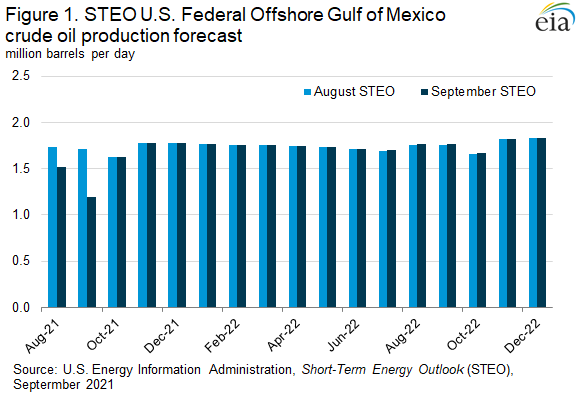 Our estimate of crude oil inputs into refineries in August fell by 166,000 b/d from the August STEO to 15.7 million b/d in the September STEO, largely driven by refineries shutting down prior to Hurricane Ida. Some refiners have resumed operations or initiated the restart process, but as of September 7, 2021, approximately 1.6 million b/d of refining capacity remained offline according to Industrial Info Resources (IIR), who anticipated that the unplanned outages will end by the third week in September (Figure 2). Weekly data indicate that gross inputs into Gulf Coast refineries fell by 1.6 million b/d from the week ending August 27 to the week ending September 3. In our September STEO, we expect refinery runs will average 713,000 b/d lower in September than they would without the disruptions. Repairs to any infrastructure required to resume refinery operations, however, could potentially take longer, making the forecast highly uncertain. For 4Q21, we forecast the average crude oil inputs into refineries to be mostly unchanged from the August STEO, remaining at 15.1 million b/d. Lower refinery runs in September will likely contribute to continuing declines in gasoline stocks during September and support gasoline crack spreads in the coming weeks. 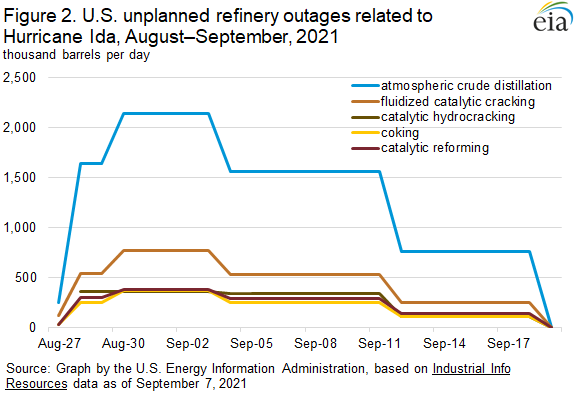 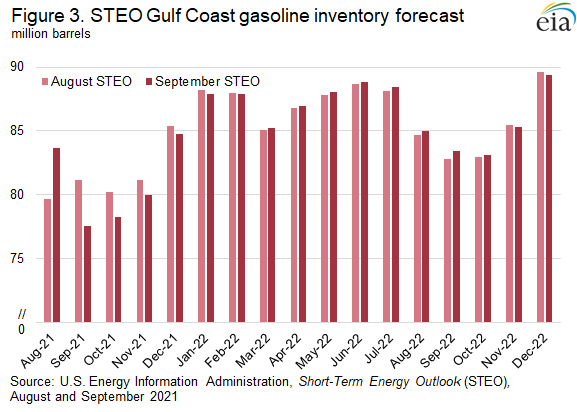 Hurricane Ida’s impacts on the Gulf Coast refinery complex are likely to add upward pressure on gasoline prices in the near term. Based on weekly EIA data, estimated gasoline margins surpassed 70 cents per gallon (gal) in late August. We expect margins will remain elevated in the coming weeks as refining operations in the U.S. Gulf Coast remain disrupted. We forecast that U.S. retail gasoline prices will average $3.14/gal in September before falling to $2.91/gal, on average, in 4Q21 (Figure 4). The expected drop in retail gasoline prices reflects our forecast that gasoline margins will decline from currently elevated levels, both as a result of rising refinery runs as operations return in the first half of September and because of typical seasonality. 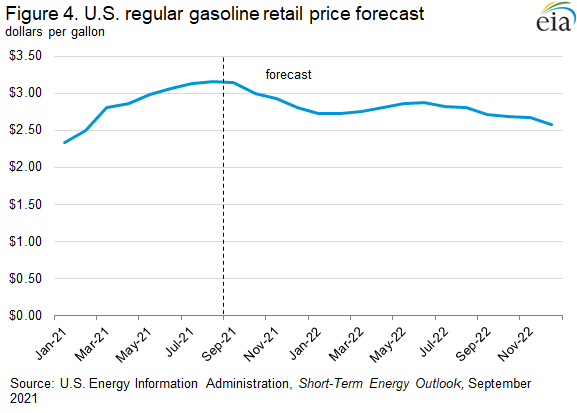 For a more detailed analysis of the impacts of Hurricane Ida on the petroleum markets, see our September STEO forecast.