Natural gas revenue made up an increasing share of total revenue for some U.S. oil producers (9/22/2021)

By admin In Chemical Industry On September 23, 2021

Natural gas revenue made up an increasing share of total revenue for some U.S. oil producers

West Texas Intermediate (WTI) crude oil prices have surpassed 2019 levels after having dropped significantly in 2020 when the market initially responded to the COVID-19 pandemic. As of September 17, 2021, however, U.S. crude oil production still remained approximately 2.5 million barrels per day (b/d) lower than its three-year peak in March 2020, and oil rig counts had returned to only 46% of their three-year peak in November 2018. As of September 17, 2021, the rolling four-week average U.S. crude oil production was 10.6 million b/d, the four-week average oil rigs was 404, and the four-week average WTI prices was $69.35 per barrel (b) (Figure 1). Although higher oil prices are increasing oil revenue amid lower crude oil production, some U.S. oil producers are receiving more natural gas revenue as a result of both higher natural gas prices and increased takeaway capacity in the Permian region, particularly since late 2020. As a result, some second-quarter 2021 (2Q21) oil company financial statements reveal a significant increase in operating cash flows. Even though prices, revenues, and operating cash flows have returned to or surpassed 2019 levels for these companies, growth in their capital expenditures has been significantly lower; expenditures are around half the amount of 2019 levels, which could affect future rig counts and production. 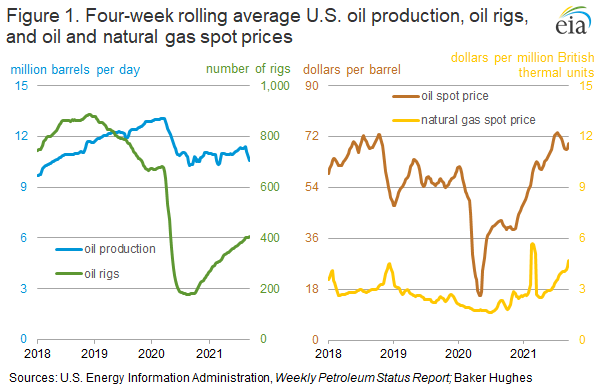 U.S. oil producers have benefited from higher oil prices as evidenced by the higher revenue and increased cash flow from operating activities (also known as operating cash flow, or OCF) reported by these companies. Despite higher OCF, these companies have not increased capital expenditures to 2019 levels, which has contributed to higher free cash flow (FCF), the financial measure found by subtracting capital expenditure from OCF. As a result of positive FCF, many oil producers have had the ability to pay capital expenditures by using OCF rather than by raising debt or issuing equity. Through 2Q21, companies have also not significantly increased oil production, instead drilling fewer wells and accessing their inventory of drilled but uncompleted wells (DUC) to complete new wells at reduced costs.

According to their publically filed financial reports, the 54 U.S. oil producers that we analyzed have reversed their financial trends since 2018. Their FCF had been persistently lower than zero, but since 3Q20, FCF has become positive and has been increasing. Capital expenditures have trended downward and have remained lower than OCF since 3Q20 (Figure 2). With positive FCF, producers can pay for capital investment programs and use cash for other financing activities, including debt reduction, dividend increases, or share repurchases. 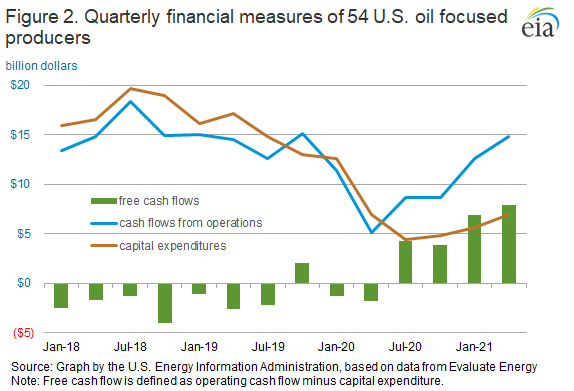 Although higher oil prices have contributed to higher OCF, higher natural gas prices and associated natural gas production have led to more natural gas revenue as a share of total revenue. Historically, producers targeted oil reservoirs in high oil production regions such as the Permian in Texas and New Mexico, the Eagle Ford in Texas, the Bakken in North Dakota and Montana, the Niobrara in Colorado, and the Anadarko in Oklahoma. When producers order rigs to drill new wells, Baker Hughes classifies the rigs as oil rigs or natural gas rigs according to what producers indicate they intend to target—oil reservoirs or natural gas reservoirs—in their drilling permits. Since 2015, almost all rigs have been classified as oil rigs in the Permian, Bakken, Eagle Ford, Niobrara, and Anadarko regions (Figure 3). Natural gas has accounted for large shares of total production in these regions, however, particularly in the Eagle Ford, Niobrara, and Anadarko. 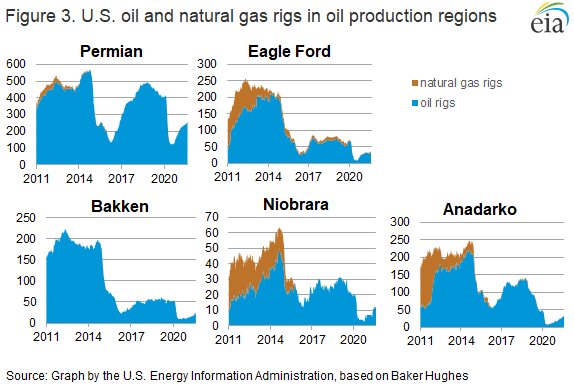 Once a well is drilled, completed, and operating, producers usually assign the well as an oil well or natural gas well according to the gas-to-oil ratio (GOR) of the well’s initial production (IP), in terms of either physical volumes or expected sales revenue. The definition of oil wells and natural gas wells varies in different states. In general, one barrel of crude oil has the same heat content as approximately 6 thousand cubic feet (Mcf) of natural gas, making 1 barrel of oil equivalent (BOE) approximately equal to 6 Mcf of natural gas. Therefore, as long as a well’s GOR is lower than 6 Mcf of natural gas per barrel of oil (Mcf/b), it is classified as an oil well.

GORs tend to increase during the lifespan of specific wells. Production of shale oil wells is high in the first few months and then declines rapidly when wells lose pressure. Extracting natural gas is easier than extracting oil from wells that have declining pressure. As a result, the GOR of wells generally increases over time (Figure 4). 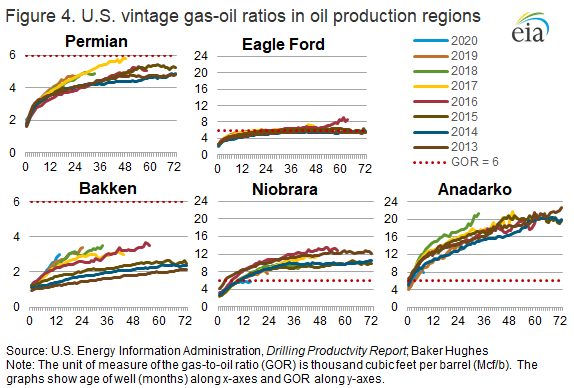 Well classification as an oil or natural gas well could also change over time, particularly for those wells with GOR close to the critical value of 6 Mcf/b. Our September 2021 DPR Supplement projects that in 2020, the increasing GOR of more than 9,000 oil wells passed the level of 6 Mcf/b. Theoretically, these wells could be reclassified from oil wells to natural gas wells, although traditionally, most states and oil producers do not reclassify wells every year. 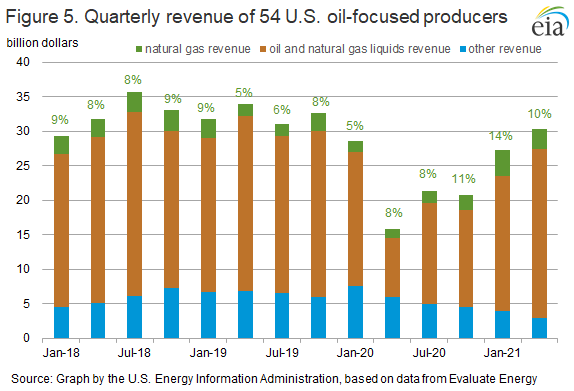