By admin In Chemical Industry On September 30, 2021

On June 12, 2021, China implemented a new consumption tax policy affecting its imports of mixed aromatics and light cycle oil—two fuels that have been used in blending gasoline and diesel. According to China’s Ministry of Finance, the new tax aims to correct a loophole that gave an unfair price advantage to some fuel sellers and to help China meet its emissions goals. This new policy has significantly reduced China’s imports of these products and has also reduced its petroleum product exports, which may be supporting crack spreads in the Asian trading hub of Singapore.

Under the new tax policy, mixed aromatics and light cycle oil, which used to be exempt from consumption taxes, are treated similarly to gasoline and diesel, which have been subject to a consumption tax. The new consumption tax on mixed aromatics and light cycle oil makes importing these products for blending uneconomical, which means importers, refiners, and trading companies can no longer outcompete traditional gasoline and diesel sellers by blending these fuels. In addition, the new tax policy may help China reduce its emissions by reducing consumption of these blending fuels that have high sulfur contents and carbon residues. 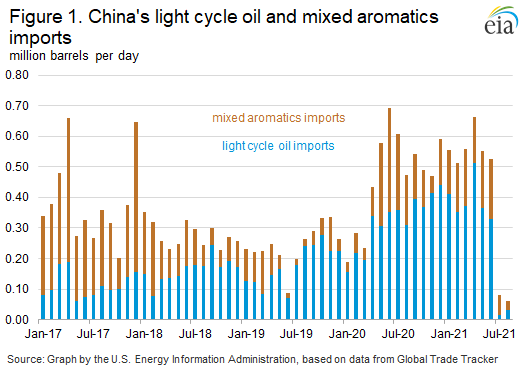 China’s imports of mixed aromatics for gasoline blending were also high in late 2020 and the first half of 2021 before the product was subject to the consumption tax. After averaging 0.17 million b/d in the first half of 2021, China’s mixed aromatics imports decreased under the new tax policy to 0.07 million b/d in July and 0.03 million b/d in August. Although these blending fuels are not economical for gasoline and diesel blending under the new tax policy, they both allow for a tax rebate when used for petrochemical production, which likely explains why these fuels are still imported, albeit at lower levels.

Its new tax policy is also affecting China’s petroleum product exports. China exported record-high quantities of distillate and gasoline in the first half of 2021 because of higher refining levels and a high export quota at the beginning of the year. However, under the new tax policy, domestic refiners likely had to reduce exports to make up for the decrease in supply now that blending light cycle oil and mixed aromatics into distillate and gasoline is not economical. July and August export statistics from China’s General Administration of Customs indicate reductions in both distillate and gasoline exports, even with similar or higher levels of refinery production of both fuels. 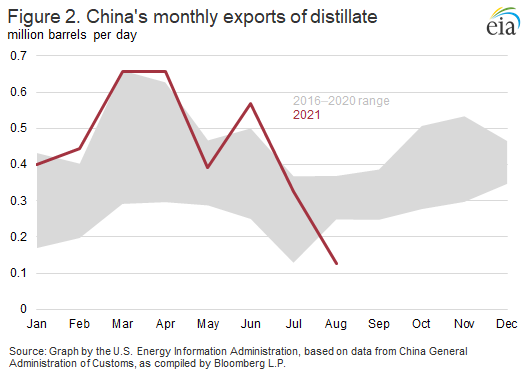 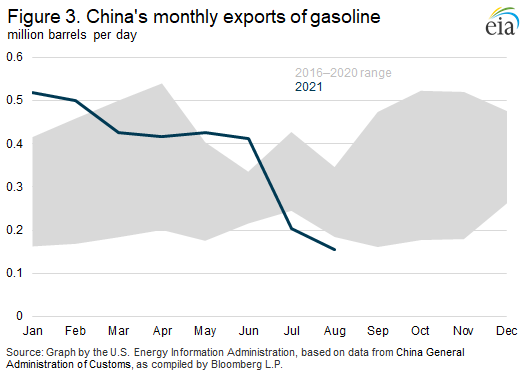 A delay in China’s announcement of a new batch of export quotas and the eventual announcement of low export quotas in August also affected exports. The possible reason for the delay and low quotas was to keep more of China’s production at home to offset any decreases in supply due to the new tax policy.

China releases several sets of fuel export quotas every year, allocating a set amount of exports to a select few, mostly state-owned refiners. Whereas last year China announced its second batch of export quotas in May, this year China delayed its second batch of export quotas until August. This delay helped reduce exports and support domestic supply since the delay forced refiners, some of which had already exhausted or nearly exhausted their allotments before July, to work within their initial export allotments for longer than expected.

In the first batch of 2021 quotas, China allotted 2 million tons (14.7 million barrels) of total transportation fuel exports to the privately run Zhejiang Petrochemical Co., which was not allotted any exports in the first batch of 2020. In addition, the overall national export quota increased 5.4% from the first batch in 2020. This increased allotment to a private refinery, as well as the higher overall quota, likely contributed to more product exports from China in the first half of the year. However, this initial batch of exports ended up having to be spread out across more months than expected, likely forcing some exporters to stop or decrease exports to comply with their allotments. In August, China announced a second batch of export quotas that was 73% lower than the second batch in 2020. China likely implemented this low batch of quotas to reduce exports in favor of supporting domestic supply.

The recent decrease in China’s petroleum product exports has likely put some upward pressure on Asian product prices, but the effects have either been modest or mostly offset by other factors. Distillate prices in Singapore, which is the major Asian market hub for petroleum products, have been increasing slowly during 2021. Gasoline prices have increased in 2021, but they decreased slightly in September (Figure 4). The average crack spread between Singapore distillate and Arabian Dubai Fateh crude oil in August was $7.32 per barrel (b), the highest monthly average since April 2020. The monthly average crack spread between Singapore gasoline and Arabian Dubai Fateh crude oil in August was $9.76/b, the highest since February 2018. Although reduced exports from China have likely provided some upward pressure to Asian product prices, the main drivers of these price increases likely have been COVID-19 case counts, responses to the pandemic, and broader economic indicators. For example, in addition to lower gasoline exports from China, India’s increasing gasoline demand is likely supporting high Singapore gasoline crack spreads. India’s demand for gasoline increased 16% year-over-year in July and 13% year-over-year in August, according to government data from India. This increase in gasoline demand came after the country’s significant demand reductions in April and May, when high COVID-19 case counts led to various travel restrictions. Distillate spreads, meanwhile, are lower than early-2020 levels, in part, because distillate demand remains below pre-COVID-19 levels in India, and, in part, because high COVID-19 case counts in diesel-importing countries such as Australia and Malaysia might be limiting Asian distillate demand. 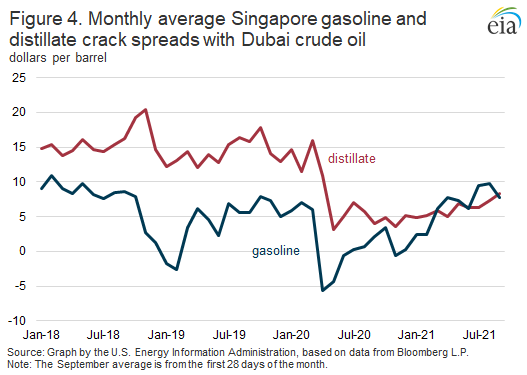