By admin In Chemical Industry On October 7, 2021 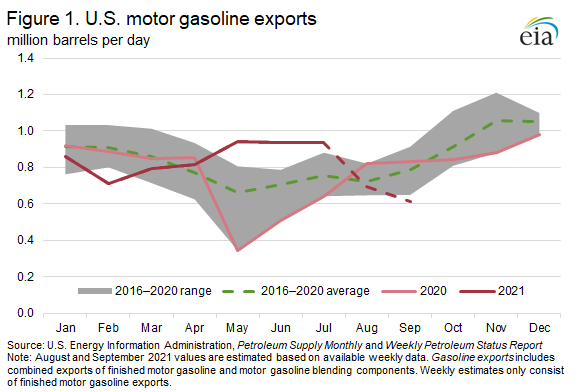 The United States typically exports more gasoline in the winter and early spring, when there is less domestic gasoline demand but refinery operations continue to operate to meet seasonally higher distillate demand. Continued refinery operations produce more gasoline than the U.S. market consumes, so the extra production instead contributes to rebuilding seasonal inventories and exports. During the summer, more domestic demand often reduces the availability of gasoline for export, contributing to less exported gasoline during that part of the year. Although the export volumes during May, June, and July were noteworthy because of their elevated levels during the summer, the United States usually exports even more gasoline during the later months of the calendar year.

Although U.S. exports of distillate fuel oil go to a relatively diverse set of destinations, exports of motor gasoline from the United States go primarily to Mexico. Exports to Mexico typically have accounted for between 50% and 70% of total U.S. gasoline exports over the past five years (Figure 2). Gasoline exports to Mexico were a major contributor to increased summer exports in 2021, averaging 619,000 b/d in May, 519,000 b/d in June, and 551,000 b/d in July. The United States exported more gasoline to Mexico in May and June than in those months before; in particular, exports reached the most elevated level for May at 270,000 b/d (77%) above the previous five-year average for May. Exports in June and July were also well above average, although by relatively smaller margins at 112,000 b/d (28%) and 69,000 b/d (14%), respectively. 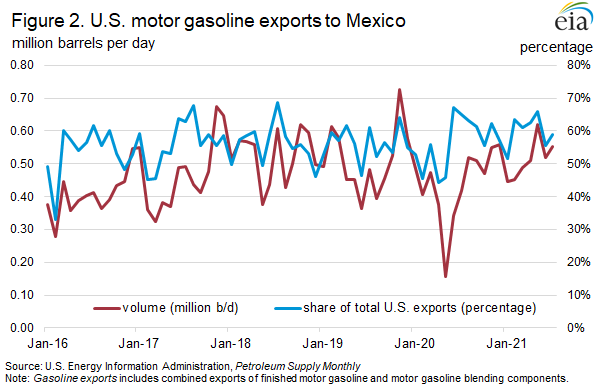 More U.S. exports to Mexico came in spite of increasing regulations on fuel importers in Mexico, including recent changes to the Mexican government’s General Rules of Exterior Trade, which became effective in mid-June 2021 and could restrict the options available to private companies to import motor gasoline and other petroleum products into Mexico. These restrictions exclude Mexico’s national oil company Petróleos Mexicanos (PEMEX). However, Mexico imported more gasoline than average during this period for several reasons. A refinery fire at PEMEX’s 285,000-b/d Minatitlan refinery required extensive repairs, resulting in reduced PEMEX gasoline production by an estimated 20% in May and 26% in June compared with their five-year averages, based on reports from PEMEX. In addition, a cyberattack temporarily disrupted the ability to move product along the critical Colonial Pipeline system in May, which might have also put pressure on Gulf Coast refiners to export volumes that would otherwise been distributed within the United States.

While gasoline exports have been elevated during the summer, U.S. imports of gasoline have also been elevated through much of 2021. Cold weather refinery outages in February led to increased imports in March to compensate for the lost production, but imports have remained above the five-year average and often above the five-year high even after U.S. refineries resumed operations (Figure 4). 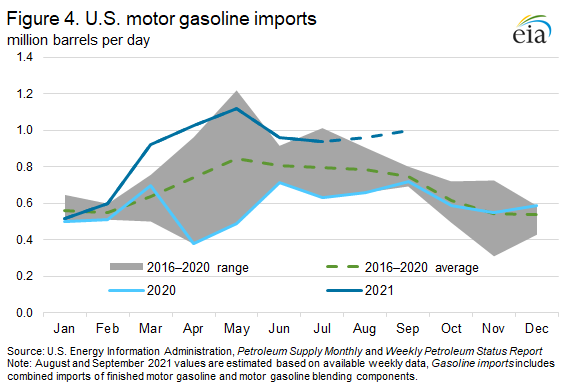 Increases in both U.S. imports and exports may reflect changing logistical conditions within the United States, or they may reflect competitively priced gasoline imports from elsewhere in the Atlantic Basin. Although the Gulf Coast has historically been the primary supplier of fuels to the East Coast, this supply chain relies on the petroleum product pipeline capacity connecting the two regions. In instances where pipeline capacity is full and there is no spare capacity, East Coast distributors may find it more cost effective to import waterborne cargo rather than purchase volumes from the Gulf Coast that must be transported to their destination by rail or barge. For example, the Colonial Pipeline cyberattack likely contributed to increased imports into the East Coast to meet shortfalls. Increased gasoline imports to the East Coast may also reflect low prices in Europe because of higher inventories there, leaving Gulf Coast refiners with additional inventory that may have otherwise gone to the East Coast but was instead redirected into exports elsewhere in the Americas. Gasoline imports into the West Coast were also higher  this summer, a region that traditionally supplies most of its own fuels but is likely increasing imports as a result of refinery closures during the past year.

Beginning this week and continuing through the end of March 2022, prices for residential and wholesale heating oil and propane will be included in This Week in Petroleum and on EIA’s Heating Oil and Propane Update webpage.