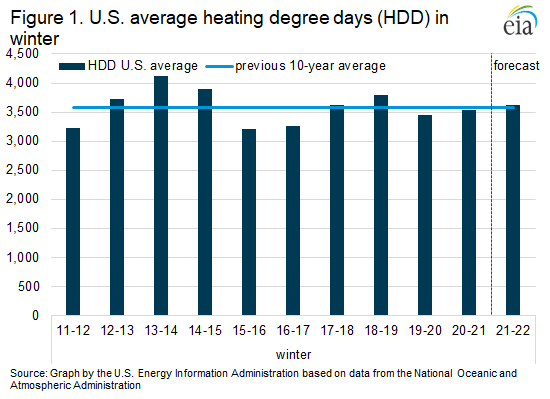 About 5% of all U.S. households use propane as their fuel for primary space heating. We forecast expenditures for the average household that uses propane as its primary space heating fuel will be $1,805 in the Midwest, $2,012 in the Northeast, and $1,643 in the South this winter. These forecasts are $736 (69%) more in the Midwest, $645 (47%) more in the Northeast, and $494 (43%) more in the South for heating this winter compared with last winter, driven mostly by higher propane prices.

Heading into the winter heating season, propane inventory levels are low, and prices are high. As of October 13, the wholesale propane spot price at the Mont Belvieu hub near Houston was $1.42/gal, up 90 cents/gal (172%) from the same time in 2020 and at the highest level since February 2014 (Figure 2). High propane prices have been driven by strong global demand for propane, relatively flat U.S. propane production, and lower global propane production. These factors have contributed to U.S. propane inventory seasonal builds to be slower than the previous five-year (2016–2020) average (propane inventories typically build from the April-May timeframe to the September-October timeframe). U.S. propane inventories (including propylene at refineries) were 71.7 million barrels on October 8, 21% lower than the previous five-year average and 28% lower than at the same time last year. 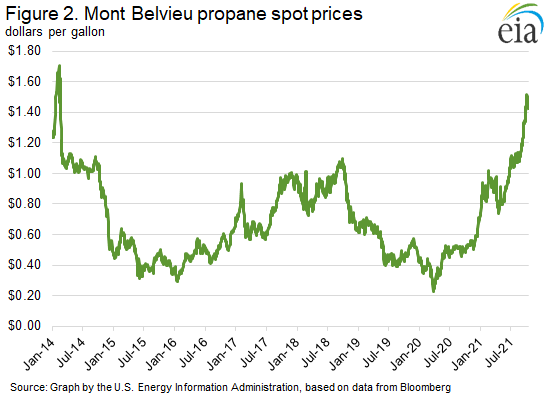 Also contributing to low U.S. propane inventories, exports from the United States during the first seven months of 2021 were the highest on record, averaging 1.3 million barrels per day (b/d). Global propane supplies have been limited because the OPEC+ crude oil production cuts have reduced associated supply of hydrocarbon gas liquids (HGLs), including propane. U.S. propane production has also been relatively flat; production between January and July in 2021 was mostly unchanged compared with the same period in 2020. Global demand for propane, however, was greater because of rising consumption in the petrochemical sector, contributing to strong exports from the United States.

In the base temperature case, we forecast that there will be 11% more propane production at U.S. natural gas plants and refineries this winter than last winter, U.S. consumption will be 1% greater, and net exports will be 4% higher. We forecast U.S. propane production will average 2.1 million b/d this winter, 0.2 million b/d more than last winter’s average, as a result of rising natural gas production and higher crude oil refinery runs. We expect propane consumption will average 1.0 million b/d this winter, a slight increase from last winter, driven by a colder winter and higher use as a feedstock in the petrochemical sector. Increased U.S. consumption for heating and petrochemicals is partially offset by less consumption for drying grain. We forecast net exports will remain relatively high as a result of international demand.

With continued OPEC+ production increases, we expect global propane supplies to increase somewhat this winter, which could reduce demand for U.S. propane exports. These supply and demand developments contribute to our forecast that U.S. propane inventories will remain at their lowest levels in more than five years, but inventory deficits to the five-year average will likely not widen significantly further.

Northeast U.S. distillate fuel inventories (which include heating oil and diesel fuel) totaled 25.8 million barrels on October 8, which is 33% less than the previous five-year average for that week. The low inventory levels are likely to put upward pressure on heating oil prices, which we expect will average $3.39/gal this winter, 33% more than last winter. However, a number of supply options are available in the Northeast (including local refinery production, pipeline shipments from other U.S. regions, coast-wise compliant shipments from other U.S. ports, and waterborne imports from Europe), and we do not expect significant supply disruptions. Distillate inventory levels are low in other Atlantic Basin markets, however, which may require higher distillate prices in the Northeast to encourage more imports if needed.

For winter 2021–22, we forecast that distillate wholesale margins (the price difference between wholesale distillate fuel oil and Brent crude oil) will average 44 cents/gal, 14 cents/gal higher than last winter and 5 cents/gal higher than the previous five-winter (2016–17 through 2020–21) average. Higher margins lead to more U.S. distillate production in our forecast compared with last winter, and we expect total refinery and blender production of distillate fuel will average 4.6 million b/d, a 6% increase from the winter of 2020–21. 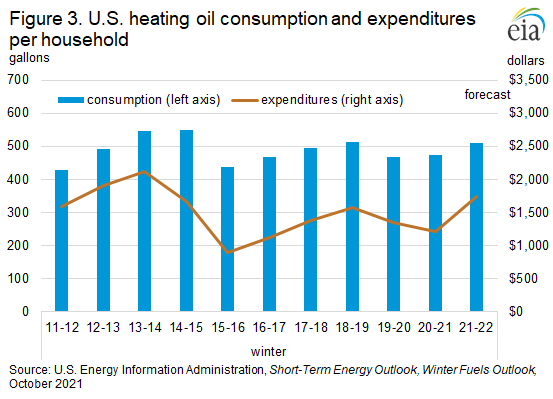