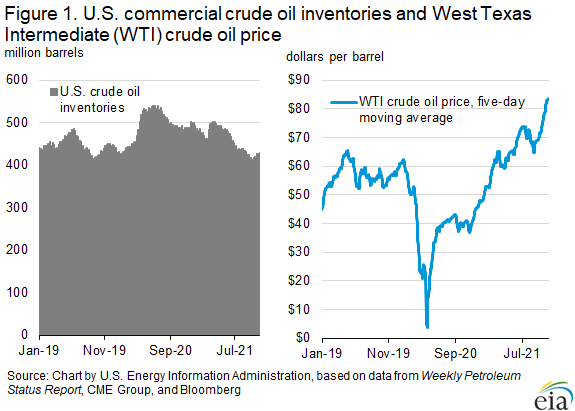 Refinery runs have increased faster than crude oil production in the United States, resulting in declining U.S. crude oil inventories. Despite several refinery closures since 2020, U.S. gross refinery inputs have nearly returned to their 2019 level for this time of year. The latest available weekly data indicate that the four-week rolling average for gross inputs into U.S. refineries was 15.7 million barrels per day (b/d) the week of October 22, a 2% decrease from the same week in October 2019.

Production cuts among OPEC member countries and others have contributed to slow growth in the production of crude oil and other liquids outside of the United States. Over the first six months of 2021, OPEC crude oil production averaged nearly 10% less than in February 2020. In July, OPEC+ announced that it would increase production by 400,000 b/d beginning in August. As a result, we estimate that OPEC production averaged 27.2 million b/d in September 2021, which is 3% less than production in February 2020. Despite the increased production, we estimate in the October Short-Term Energy Outlook that global petroleum stock draws averaged 1.9 million b/d in the third quarter of 2021, which is more than the 2016–2020 average draw for the third quarter of 1.0 million b/d.

Due to slower growth in U.S. and global crude oil production, market participants have been drawing inventories to meet fast-growing petroleum product demand, particularly for gasoline and diesel. Based on a rolling four-week average of product supplied data, U.S. gasoline demand fell to 5.3 million b/d the week of April 24, 2020, a 44% decrease from the 2019 level for the same week. Gasoline demand has been within 3% of 2019 levels since July 2021; however, U.S. gasoline demand for the week of October 22, 2021, averaged 9.4 million b/d, only 2% below the 2019 average for the same week. Distillate demand has returned even more quickly. From August 13 to October 15, distillate demand has been above 2019 levels (Figure 2). For the week ending October 22, U.S. distillate demand averaged 4.1 million b/d, 2% less than the same week in 2019. Although jet fuel demand remains 19% lower than 2019 levels, it is higher than in early 2021, when demand was about 30% to 40% lower than in 2019. 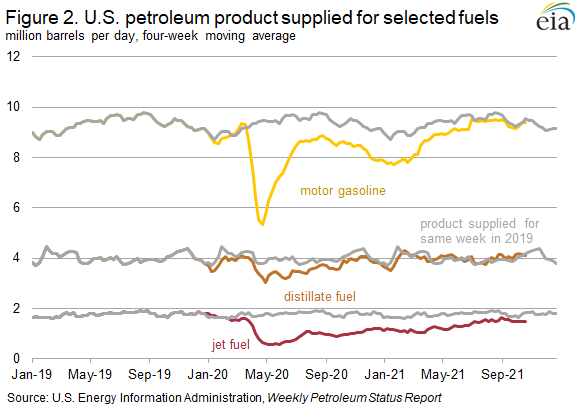 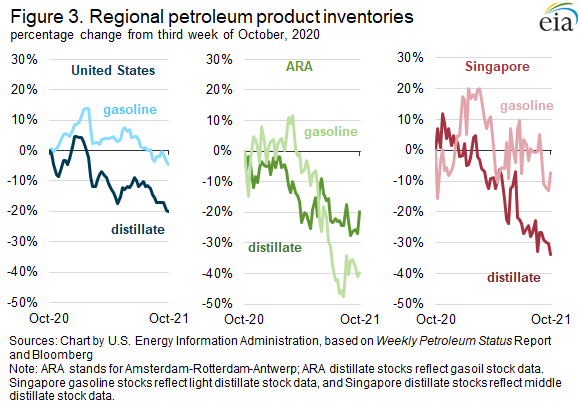