By admin In Chemical Industry On November 3, 2021

In early 2021, West Texas Intermediate (WTI) crude oil futures and options open interest (number of contracts outstanding) increased as crude oil prices and global oil production and consumption rose. According to the Commodity Futures Trading Commission’s (CFTC) Commitments of Traders (COT) report, market participants in the producer/merchant category, which includes upstream producers, refiners, terminal operators, and other physical market participants, contributed significantly to the increase in open interest in the first quarter of 2021 (1Q21). The total producer/merchant contracts held peaked at 1.45 million contracts on June 15 before decreasing, driven by a drop in short positions, likely in response to revised hedging strategies from upstream producers. Initiating a short position includes selling a futures contract, selling a call option, or buying a put option, and it allows the holder to lock in a future price for a commodity today, which oil producers and end users can use as a way to hedge or mitigate price risk. Conversely, a long position includes buying a futures contract, buying a call option, or selling a put option, allowing the holder to benefit from a price increase in the future. Total contracts held by money managers (which includes bankers and financial fiduciaries) also decreased in July and August before beginning to increase again in early September at the same time as nominal crude oil prices began increasing to highs not seen since 2014.

Crude oil and other commodities are traded on futures markets, which are exchanges that market participants can use to manage risk associated with price uncertainty in a variety of businesses, including upstream crude oil production, refining, shipping, and portfolio management. Futures markets play a role in crude oil price discovery, and futures markets are essential to the ability of crude oil producers and end users to manage the risk associated with uncertain crude oil prices. The CFTC’s COT report lists the aggregate positions of all market participants within CFTC’s designated categories that engage in buying and selling of WTI futures, as well as financial options that are converted into futures-equivalent contracts. The CFTC’s producer/merchant category reflects entities that predominantly engage in the production, processing, or handling of a physical commodity and tend to use the futures markets to manage or hedge risks associated with those activities. Unlike producer/merchant open interest, the CFTC’s money manager open interest category represents positions taken by financial market participants, such as funds and commodity traders, rather than market participants engaged in the physical buying or selling of crude oil as their primary business. 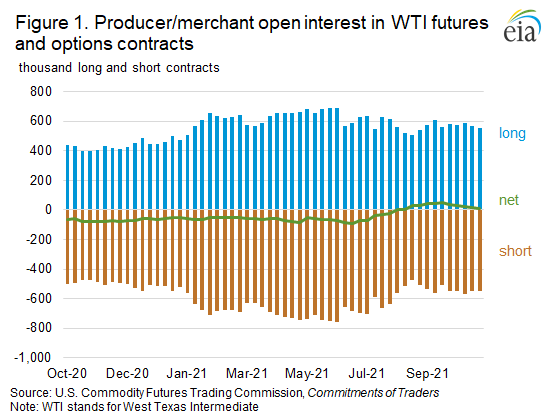 An analysis of financial disclosures from 75 publicly traded U.S. producers shows hedging activity increased starting in 2Q20 because of volatility in WTI prices caused by the COVID-19 pandemic. Hedging of total crude oil and natural gas liquids (NGL) field production by these 75 U.S. upstream companies reached nearly 72% of their collective production in 2Q20 compared with the 2017–19 average of 41% (Figure 2). These 75 firms accounted for 35% of total U.S. crude oil/NGL field production in 2Q21. These observations do not represent the U.S. upstream sector as a whole because the analysis excludes private companies that do not publish financial reports and some public firms that do not engage in financial hedging. 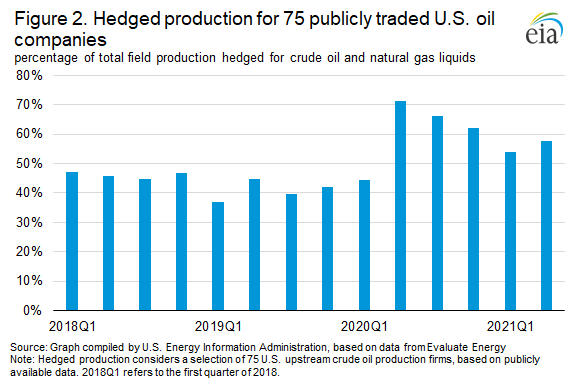 Hedging allows producers to mitigate financial losses due to lower sales prices if prices decline, but generate financial losses (offset by physical sales) if prices rise higher than the level at which they sold production forward. As WTI prices increased in 2021, crude oil producers gained increasing revenues on crude oil barrels sold into the market. However, the price difference between barrels sold at the market rate and barrels that had been hedged also increased. Upstream producers—including Devon Energy, Diamondback, and Ovintiv—reported some financial losses in their second-quarter financial filings because of hedging at around $50 per barrel (b). Because WTI crude oil spot prices averaged $66/b for 2Q21, these companies reported financial losses on their hedged barrels, usually of around $13/b compared with unhedged barrels. The difference between the prices of hedged barrels and the market price of crude oil in 2Q21 may have provided some incentive for some crude oil producers to reduce hedging beginning in 3Q21, potentially contributing to fewer net short position of contracts held by producers and merchants.

In the money manager category of the COT report, net long positions have increased since early September 2021 (Figure 3). Open interest from money managers typically reflects market participants who are investing in crude oil to gain financial exposure (a position in which they benefit from price increases) to commodities as an asset class. As a result, money manager open interest in crude oil futures leans toward a net long position, reflecting a financial position that increases in value when crude oil prices increase. 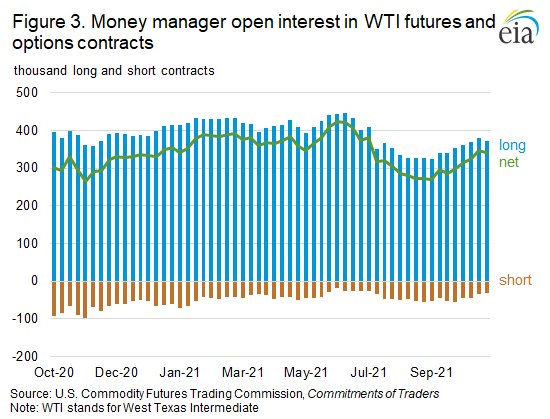 Since reaching a 2021 low of 376,000 contracts on August 17, total contracts held by money managers in WTI futures and options have increased by 27,000 contracts (about 7%), and the net long position of money managers has increased from 280,000 contracts on August 17 to 341,000 contracts as of October 26. The net long position for money managers remains less than it was during the summer, but it has increased with relative consistency since early September. Increasing money manager open interest correlates with increasing global crude oil prices. The WTI front-month futures price increased from just over $69/b in early September to $84/b on October 29, an increase of 22%. Crude oil prices have been relatively high through much of 2021, but the October prices mark the year’s highest price levels and crude oil’s highest nominal price since 2014.

Money managers could be increasing financial exposure to crude oil and other commodities as a way to mitigate financial risks from increased inflation. Among other macroeconomic factors, increasing crude oil prices have contributed to increased inflation expectations in financial markets, as observed by the difference between the yield on the five-year U.S. Treasury Bond and the Treasury Inflation Protected Security (TIPS) (Figure 4). Price increases because of supply chain constraints, combined with an increasing energy component of the Consumer Price Index (a key inflation indicator), underscore some of these concerns and put pressure on money managers to pursue investments that will maintain value should inflation continue. As the TIPS-Treasury spread increases, this trend indicates market participants expect impending inflation (although it does not indicate a corresponding change in actual inflation). As of October 29, the TIPS-Treasury spread had increased to nearly 2.9%, an increase of 0.41 percentage points from the beginning of September and its highest level in 2021. 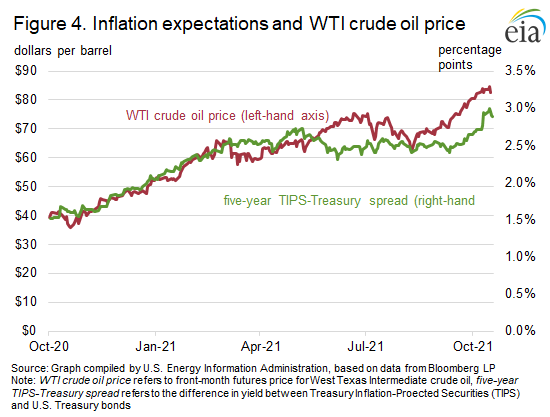