By admin In Chemical Industry On November 17, 2021

In recent months, the prices of crude oils with high levels of sulfur have generally been declining relative to those with lower levels of sulfur. Crude oil prices reflect a variety of factors, such as quality characteristics, geography and logistics, and changes in demand for different petroleum products. Two of the more important quality characteristics of crude oil are density and sulfur content. Density ranges from light to heavy, while sulfur content is characterized as sweet (lower sulfur content) or sour (higher sulfur content). Sour crude oil prices have decreased compared with sweet crude oil prices because of increasing crude oil exports from OPEC members that produce mostly medium sour crude oil. In addition, high natural gas prices have been increasing desulfurization costs. The high costs of desulfurization are also increasing the prices of low sulfur petroleum products compared with high sulfur fuels, mostly in Europe.

Sour crude oils typically sell at a discount to sweet crude oils because they must first be treated with hydrogen to meet low-sulfur fuel specifications and to avoid damage to refinery units. In recent months, however, discounts have widened compared with historical averages. For example, Mars crude oil is produced in the Federal Offshore Gulf of Mexico and has a sulfur content of 1.93%. Dubai crude oil has a sulfur content of 2.04%. Both crude oils have decreased in price relative to Magellan East Houston (MEH) and Brent crude oils, which both have sulfur contents of 0.45%. The Mars-Brent spread widened to an average of -$4.90 per barrel (b) so far in November. This spread follows an average spread of -$4.09/b in August (the first month of recently announced production increases from OPEC+) and -$1.47/b in January (Figure 1). 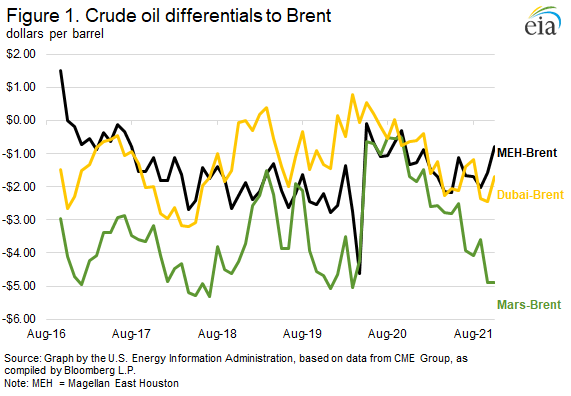 Crude oil prices vary by more than just sulfur specifications. For example, geography and shipping logistics can affect price as well. We can partially account for those factors by comparing crude oils produced in close regional approximation and shipped the same way. For example, the main difference between MEH and Mars crude oils is quality. Because both crude oils are priced on the U.S. Gulf Coast and are consumed by local refineries or shipped for export, changes in the price spread between those two crude oils is indicative of changes in demand for different crude oil qualities.

In contrast, MEH and Brent are both light, sweet crude oils of similar quality. So, the MEH-Brent spread is a measure of how much geographic and logistical factors are affecting U.S. Gulf Coast crude oil prices relative to Brent prices. The MEH-Brent spread has averaged -$0.80/b so far in November, narrower than the average of -$1.71/b in August and -$0.87/b in January. This price increase for the light, sweet MEH crude oil relative to Brent crude oil prices indicates that geographic factors have likely not contributed to the wider price spreads that have occurred between the sourer Mars crude oil and Brent. Rather, differences in supply and demand for sweet versus sour crude oils likely account for those wider price spreads.

Other spreads between sour crude oils and Brent also indicate changes in market fundamentals for sweet and sour crude oils. The Dubai-Brent spread in November so far has averaged -$1.70/b, wider than spreads of -$1.17/b in August and -$0.40/b in January. Western Canada Select, which is a heavy, sour crude oil with a sulfur content of 3.64%, has been at its highest discount to Brent since February 2020.

One contributing factor to the widening spread between sweet and sour crude oils is the increasing supply of medium and heavy sour crude oils. OPEC has been increasing production and exports since the second half of 2021, particularly in countries that produce sour grades. According to ClipperData, combined crude oil exports from Iraq, Kuwait, Saudi Arabia, and the United Arab Emirates—OPEC members that produce mostly sour grades—have increased from 13.3 million barrels per day (b/d) in June to 15.1 million b/d in October, an increase of 13% (Figure 2). Although crude oil exports from these four countries remain lower than 2019 levels, their increase from 2020 and the first half of 2021 is likely contributing to relatively lower prices for sour crude oils. In comparison, when OPEC reduced production in early 2019, the lower supply of sour crude oils resulted in relatively higher prices for sour crude oils, including a positive Dubai-Brent spread during some months. 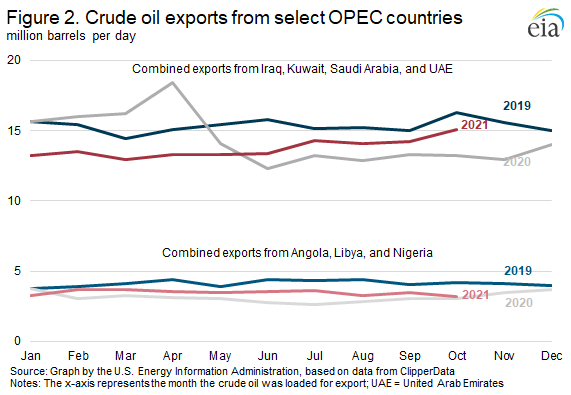 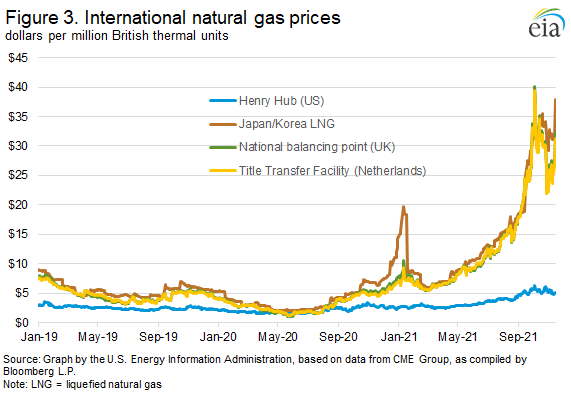 In addition to affecting crude oil price spreads, higher desulfurization costs have contributed to wider spreads between petroleum products with varying sulfur contents. All petroleum product prices have generally been increasing in 2021; however, high-sulfur product prices have increased less in the second half of 2021 than low-sulfur product prices. This difference has contributed to the widest spreads between the two product prices since the buildup to IMO 2020, which updated sulfur content regulations. The price disparity between high-sulfur and low-sulfur products is likely because refiners must either buy sweet crude oils that are more expensive or incur costs desulfurizing sour crude oils into low sulfur products. For example, at the Amsterdam, Rotterdam, Antwerp (ARA) petroleum product trading hub in Europe, price spreads between low-sulfur fuels and high-sulfur fuels have widened in recent months. On November 16, the five-day moving average for ARA ultra-low sulfur diesel (ULSD) closed at $95.15/b and ARA 3.5% residual fuel oil closed at $64.12/b, a $31.02/b discount of ARA residual fuel to ARA ULSD. This discount was wider than the January through June average price spread of $16.61/b. Similarly, price spreads between Rotterdam very low sulfur fuel oil (VLSFO) marine fuel and Rotterdam bunker fuel have also widened; the high sulfur bunker fuel closed $25.67/b lower than the low sulfur marine fuel on November 16 (Figure 4). 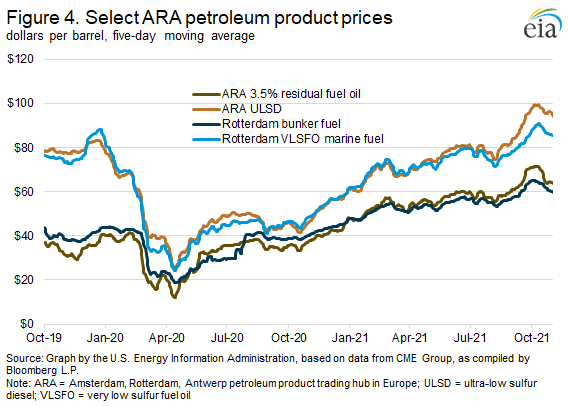