By admin In Chemical Industry On November 25, 2021

With rising demand, U.S. average gasoline prices this Thanksgiving are the highest since 2012

The average U.S. regular retail gasoline price across all formulations (conventional and reformulated) on the Monday before Thanksgiving was $3.40 per gallon (gal), $1.29/gal (62%) higher than it was the week before Thanksgiving last year and the highest pre-Thanksgiving price since 2012 (in nominal terms). Compared with levels before the COVID-19 pandemic, prices are $0.82/gal (32%) higher than at the same time in 2019 (Figure 1). According to our latest 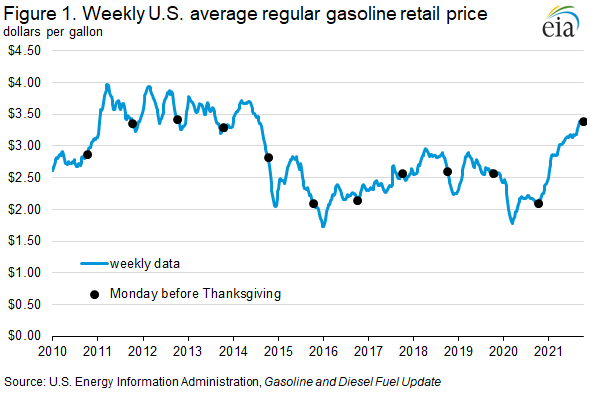 Higher crude oil prices, greater demand for gasoline, and lower gasoline inventories are continuing to push gasoline prices higher. Gasoline typically follows a seasonal trend: prices increase in late summer, when people drive more frequently, and then decline going into the winter months, when regulations on gasoline volatility allow refiners to use less expensive components to produce gasoline. This year, gasoline prices were flat in September and then rose nearly 20 cents/gal in October before leveling off in November. Our November primary driver of U.S. gasoline prices, making up 57% of the total cost to produce a gallon of gasoline in October 2021. The spot price for Brent crude oil was $79.70 per barrel (b) on November 22, an increase of $34/b (73%) compared with the Monday before Thanksgiving in 2020 and $16/b (25%) higher than the same time in 2019. Global demand for crude oil has outpaced production in 16 of the last 17 months since June 2020. This sustained imbalance has contributed to higher crude oil and petroleum product prices, including for gasoline.

Gasoline demand (measured as product supplied) increased consistently over the course of 2021 as COVID-19 restrictions eased and economic stimulus policies drove U.S. gross domestic product to exceed pre-pandemic levels by the second quarter of 2021. According to our forecasts 53.4 million people will travel for the Thanksgiving holiday, a 13% increase over 2020 and 5% less than in 2019. This figure represents the highest single-year increase in Thanksgiving travel since 2005. Relaxed guidelines from the Centers for Disease Control and Prevention (CDC) for vaccinated people, lessening concerns over the COVID-19 Delta variant, and the recent opening of U.S. borders to fully vaccinated travelers from Mexico and Canada are likely contributing to rising gasoline demand going into the holiday weekend. 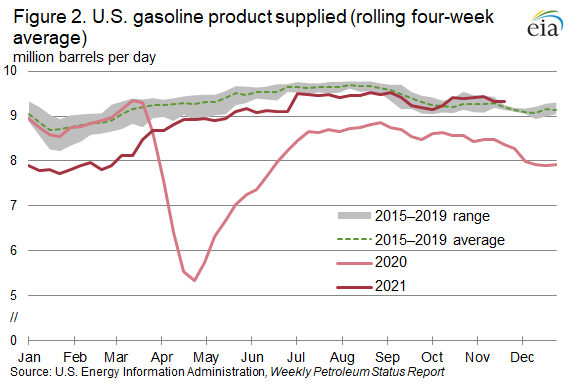 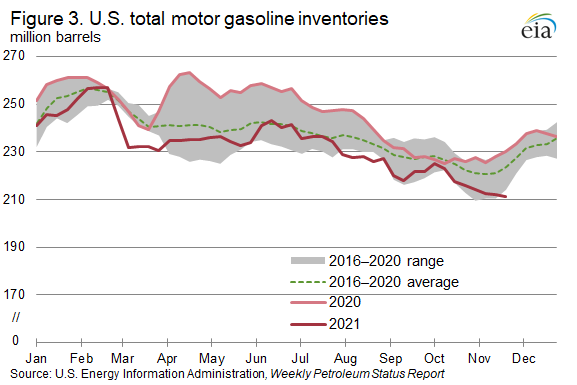 Retail gasoline prices vary significantly across the United States because of regional supply and demand balances, gasoline specifications, logistical constraints, and taxes. As of November 22, regular retail gasoline prices were $3.03/gal on the Gulf Coast, $3.20/gal in the Midwest, $3.35/gal on the East Coast, $3.52/gal in the Rocky Mountains, and $4.19/gal on the West Coast (Figure 4). Notably, retail prices in every region except the Rocky Mountains have increased since the beginning of October. West Coast prices in particular continued to increase through November, reaching a $0.80/gal premium over the U.S. average. West Coast retail gasoline prices are often higher than the U.S. average price because of the region’s isolation from alternative supply sources, gasoline specifications that are more costly to manufacture, and higher taxes. In 2021, the West Coast has faced additional supply constraints because of reduced refinery capacity compared with 2019. 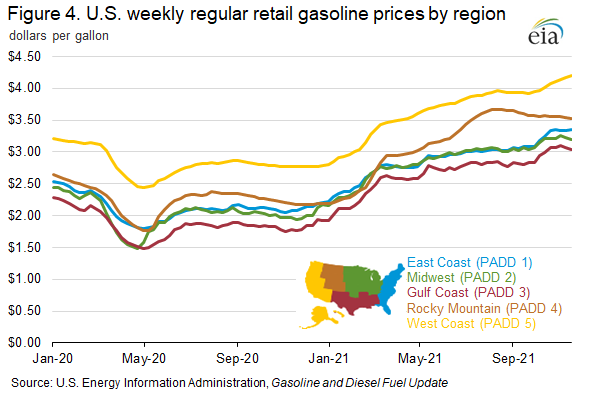