By admin In Chemical Industry On December 2, 2021

After peaking this summer at levels well above the seasonal average, U.S. jet fuel inventories fell back below their five-year (2016–2020) average in September and November and below the five-year low during the week ending November 26. The low inventories reflect less overall refinery production in October, as well as increasing jet fuel consumption relative to this summer. Although jet fuel demand and production both remain below 2019 average levels, lower inventories and relative increases in demand have contributed to the increasing jet fuel crack spread (the difference between the price of a barrel of jet fuel and a barrel of crude oil) since early July. For the first time since the broader rollout of COVID-19 vaccinations began in February 2021, jet fuel crack spreads were briefly higher than the 3-2-1 crack spread at the U.S. Gulf Coast (USGC) in early November and now remain near equal levels. The 3-2-1 crack spread is a measure of the overall profitability of refineries calculated by subtracting the price of a barrel of crude oil from two-thirds the price of a barrel of gasoline and one-third the price of a barrel of diesel. New concerns about the potential impact of the COVID-19 Omicron variant have already prompted precautionary new restrictions on international travel. Reports of the variant contributed to a 12% decrease in the Brent crude oil futures price on November 26, and concerns over the variant spreading are likely to contribute to reduced demand for jet fuel, in particular, which may also put downward pressure on the jet fuel crack spread.

High summer jet fuel inventories reflected increased refinery production during a period in which increasing market demand for gasoline and distillate encouraged refiners to process more crude oil. Hurricanes along the Gulf Coast in August contributed to temporary refinery outages and reduced production, which brought inventories to more seasonally normal levels. Beginning the week ending September 3, inventories fell below the five-year average. Since then, weekly jet fuel inventories have remained below the five-year average except for the week ending October 22. The four-week average of U.S. crude oil inputs to refineries that have remained below 16 million barrels per day (b/d) since the last week of August (Figure 1). Lower crude oil inputs in September and October reflect a seasonal trend of reduced refinery operations for maintenance. The reduced refinery production has also contributed to keeping jet fuel inventories relatively low compared with summer levels. 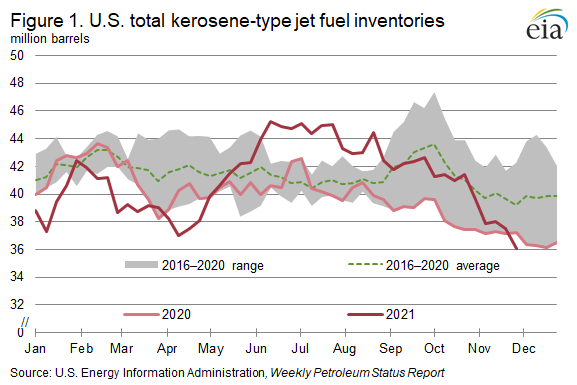 Jet fuel demand (measured as product supplied) has been well below average since the onset of the COVID-19 pandemic. In addition to elevated jet fuel production over the summer, jet fuel demand remained relatively low, further contributing to building inventories. However, jet fuel demand gradually increased from the start of the year through August 2021 (Figure 2). Beginning in July 2021 and through November, jet fuel consumption has been within 20% of 2019 levels, according to the Petroleum Supply Monthly and Weekly Petroleum Status Report. In November 2020, for comparison, levels where at about half of what they were in 2019. 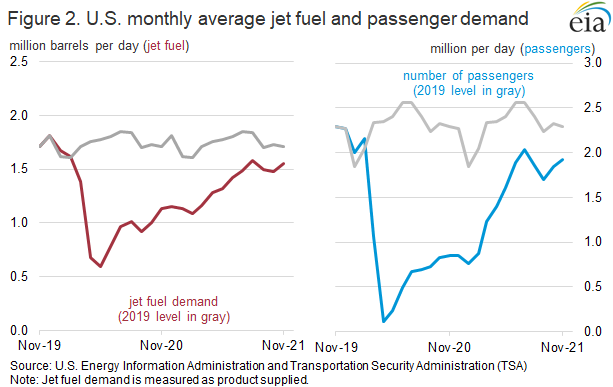 The trend in jet fuel demand is similar to overall trend in the number of passengers reported by the Transportation Security Administration (TSA). The rolling seven-day average air traffic passenger level has been within 30% of 2019 levels since June, and it has remained within 15% since November 20. The narrowing gap to 2019 in late November is likely the result of increased travel for Thanksgiving as well as increased passenger travel as a result of reduced restrictions on international travelers to the United States, which went into effect in November. The number of passengers does not account for each passenger’s destination, total aircraft miles traveled, or the relative fuel efficiency of a given aircraft, which explains why the TSA passenger numbers are not directly comparable with our jet fuel product supplied data.

U.S. air travel since the start of the pandemic has been more concentrated in domestic travel, which returned to pre-pandemic levels more quickly than international travel. Increasing domestic air travel during the December holidays could result in more U.S. air travel and jet fuel demand through the end of the year. At the same time, recent increases in COVID-19 cases and reported new variants could also lead to further restrictions on mobility or changes in consumer behavior, and these factors are a downside risk to jet fuel demand. On a longer-term basis, consumer hesitancy, continuing intermittent restrictions on international travel, and reduced business travel may contribute to reduced jet fuel demand in 2022 and onward. 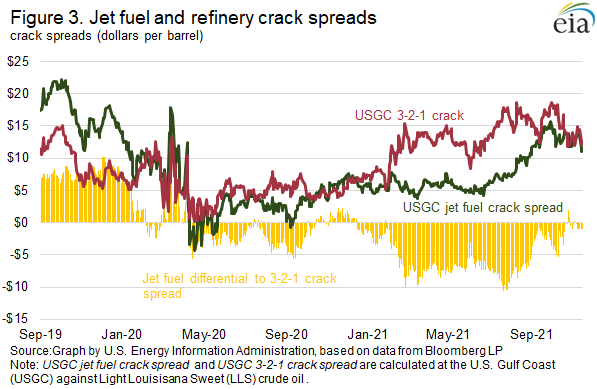