By admin In Chemical Industry On January 6, 2022

The Brent crude oil price increased from 2020 to average more than $70 per barrel (b) in 2021 as global demand for petroleum products increased faster than production, leading to global inventory draws. Nominally (not adjusted for inflation), the annual average crude oil price reached its highest level since 2018. Crude oil prices are the largest determinant for wholesale and retail gasoline prices, which were at their highest nominal levels since 2014. 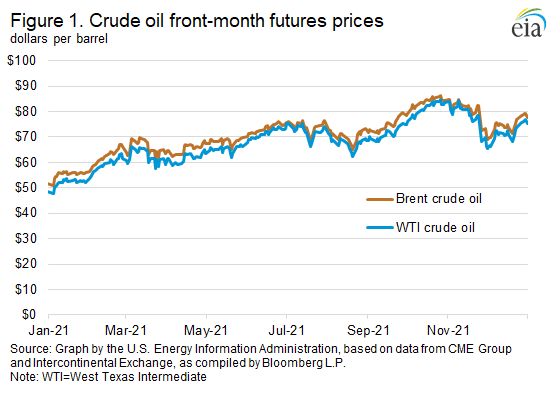 Crude oil prices decreased during three distinct periods in 2021, all of which were related to developments in the COVID-19 pandemic. The first crude oil price decrease occurred in mid-March as COVID-19 cases increased, notably in Europe. Also at this time, COVID-19 case counts were beginning to increase in India, which saw significant declines in petroleum consumption in the second quarter of 2021 as a result of responses to higher COVID-19 counts. Crude oil prices decreased a second time in August as COVID-19 counts increased with the spread of the Delta variant, which caused market concerns for lowered demand. Crude oil prices fell a third time beginning on November 26, when the front-month futures price for Brent crude oil decreased by $9.50/b, or nearly 12%, after the World Health Organization designated the SARS-CoV-2 Omicron variant as a variant of concern. Nevertheless, by December, the average Brent crude oil front-month futures price was $25/b higher than in December 2020.

During the first two months of 2021, expectations that petroleum product demand would increase as the COVID-19 vaccines became available likely explained crude oil price increases. As the year progressed, vaccination and employment rates increased, the number of people open to travel increased, and the expectations of more demand for petroleum products were realized. Crude oil prices also increased because global production increased more slowly than demand, mostly as a result of OPEC+ production cuts. OPEC+ members announced limitations on production increases in December 2020, and Saudi Arabia announced additional unilateral production cuts of 1.0 million barrels per day (b/d) for February and March that contributed to continued price increases throughout the year. In addition, U.S. crude oil production in 2021 averaged 0.1 million b/d less than its 2020 level and 1.1 million b/d less than its 2019 level. Severe weather disruptions in February and August contributed to this decrease, but the decline in investment among U.S. oil producers since mid-2020 also played a role.

Increasing demand and decreased supply resulted in consistent global petroleum inventory withdrawals from February through December that contributed to increasing crude oil prices. The largest draw was in February, when Saudi Arabia voluntarily cut crude oil production by 1.0 million b/d and the United States experienced extremely cold weather that led to well freeze-offs and a 1.3 million b/d decline in crude oil production (Figure 2). Global withdrawals were also high in June, one month before OPEC+ announced that it would begin increasing crude oil production each month. We estimated in our December 2021 Short-Term Energy Outlook (STEO) that petroleum inventories decreased by 469 million barrels globally in 2021. Although the 2021 inventory withdrawal estimate is still preliminary, if realized, it would represent the largest annual petroleum inventory withdrawal since 2007. 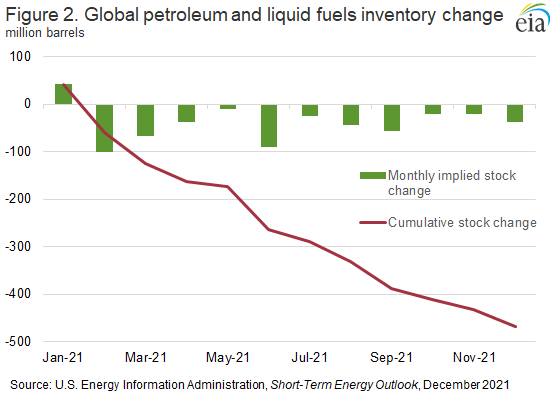 Rising crude oil prices contributed to an increase in the front-month futures price of reformulated gasoline blendstock for oxygenate blending (RBOB, the petroleum component of gasoline used in many parts of the country). In 2021, RBOB reached its highest nominal price since September 2014. The RBOB futures price began the year at $1.37 per gallon (gal), but it increased to more than $2.00/gal in early March and reached as high as $2.52/gal on October 26 (Figure 3). In addition, the RBOB–Brent crack spread (the difference between the price of RBOB and the price of Brent crude oil) in 2021 was higher than the five-year (2016–2020) average and set five-year record highs for most of the year. In August, the crack spread averaged $0.55/gal, the highest monthly average since July 2015. High crack spreads indicate that the high gasoline prices were not only due to high oil prices, but also to factors specific to gasoline. In 2021, the most significant contributing factor to the high RBOB-Brent crack spreads was likely strong gasoline demand. In addition, supply-side factors, including reduced U.S. refinery capacity in 2021, further contributed to low gasoline inventories and higher crack spreads. Higher feedstock and blending costs because of higher butane and ethanol prices also likely added some upward pressure to the RBOB-Brent crack spreads. 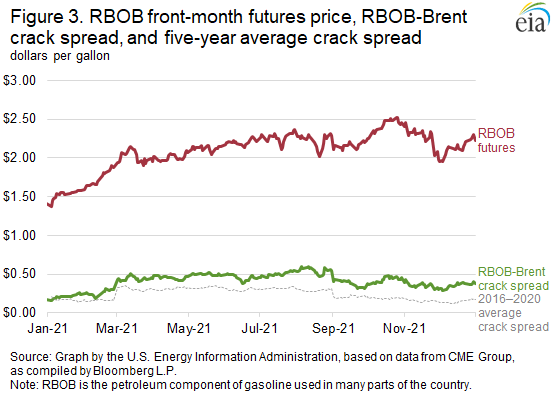 We estimated in our December 2021 STEO that U.S. gasoline consumption, while still less than in 2019, has mostly returned to pre-pandemic levels. We estimate that U.S. gasoline consumption averaged 8.8 million b/d in 2021 and consumption in the fourth quarter of 2021 totaled 0.2 million b/d (2%) less than in the fourth quarter of 2019. Similar to crude oil and RBOB prices, nominal U.S. average retail gasoline prices increased to the highest average annual level since 2014, averaging $3.01/gal for the year. 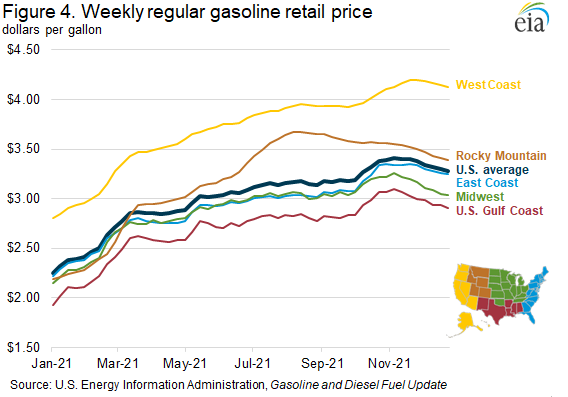