Global oil consumption outpaced oil production for the six consecutive quarters ending with the fourth quarter of 2021 (4Q21), which has led to persistent withdrawals from global oil inventories and significant increases in crude oil prices. Crude oil production remained restrained as a result of curtailments by OPEC+ members, investment restraint from U.S. oil producers, and other supply disruptions. In 1Q22, however, we forecast that global oil markets will be balanced and that rising production will contribute to inventory builds in 2Q22 and continuing through 2023. The inventory draws from 3Q20 to 4Q21 put upward pressure on crude oil prices. We expect the forecast inventory builds from 2Q22 to 4Q23, conversely, to put downward pressure on crude oil prices. The price of Brent crude oil averaged $71 per barrel (b) in 2021, and we forecast that the price will fall from the current price of around $80/b to average $75/b in 2022 and $68/b in 2023 (Figure 1). 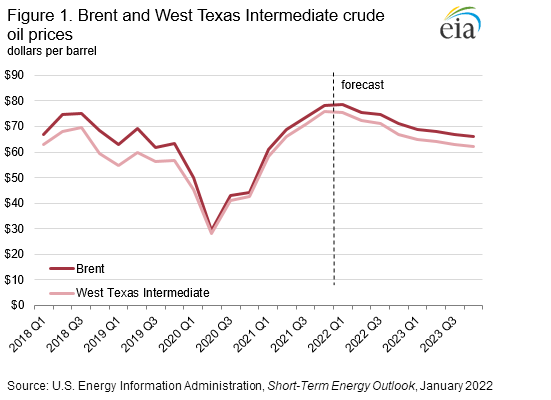 During 2021, the Brent price reached its highest monthly average, $84/b, in October and then fell to an average of $74/b in December. The price decline largely reflected concerns about how the Omicron variant and potential mitigation efforts may affect near-term oil demand. However, crude oil prices ended December at $77/b as concerns eased that Omicron would lead to significant declines in oil consumption. In addition, 0.3 million barrels per day (b/d) of crude oil production went offline in Libya, contributing to the increasing oil price. 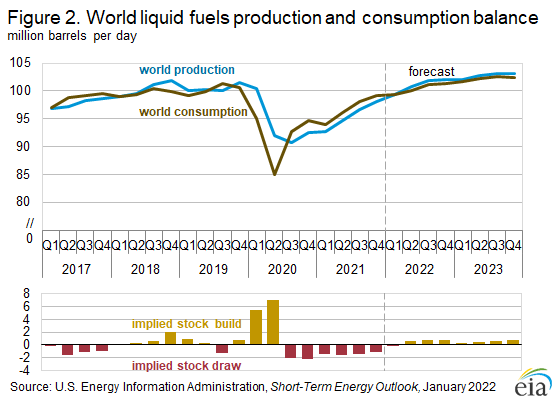 We expect production will increase for most of 2022 as more new wells come online. For U.S. tight oil production, our models include a four- to six-month lag between a change in oil price and change in production. We expect the recent West Texas Intermediate (WTI) crude oil price, which averaged more than $70/b during most of the second half of 2021 (2H21), and average forecast WTI prices of $74/b during 1H22 will contribute to an increased number of active drilling rigs and production growth in the Lower 48 states (L48). We expect annual average L48 production of 9.6 million b/d for 2022, which is 3% lower than the 2019 record high of 9.9 million b/d.

We expect the WTI crude oil price will average $71/b in 2022. Although down from the current price, it is still sufficient for producers to realize positive cash flows in many areas, particularly the more productive areas of the Permian Basin. Most of L48 growth in the forecast comes from the Permian Basin. 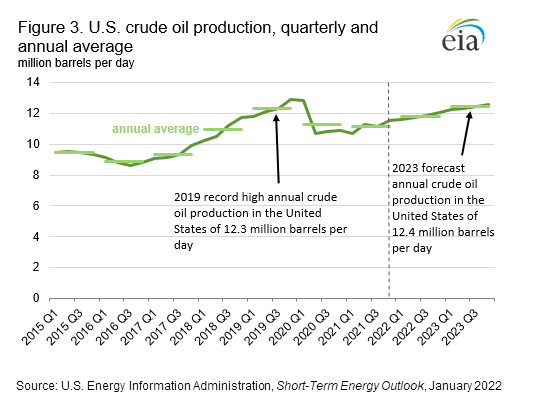 Governments in non-OECD countries in the Asia Pacific and Latin America regions eased mobility and business activity restrictions during 2021 as an increasing share of the population was vaccinated. However, outbreaks of the Omicron variant in some Asia Pacific countries have led their governments to delay reopening plans or to extend current restrictions. The Middle East and Africa regions have been relatively slower to ease mobility restrictions than Europe and the United States. Outbreaks of COVID-19 infections and renewed restrictions on mobility and business activity still pose a significant downside risk in these regions.