Heading into the Memorial Day weekend, the U.S. average retail price of regular gasoline was $4.59 per gallon (gal) on May 23, the highest inflation-adjusted (real) price since 2012 and the fourth-highest price on record (Figure 1). On a nominal basis, it is the all-time highest price for gasoline in our weekly Gasoline and Diesel Fuel Update, which dates back to 1990. The high price of gasoline is currently driven by several factors, including the price of crude oil, the effects of Russia’s full-scale invasion of Ukraine, and U.S. gasoline demand growth outpacing refinery runs, resulting in large gasoline inventory draws. 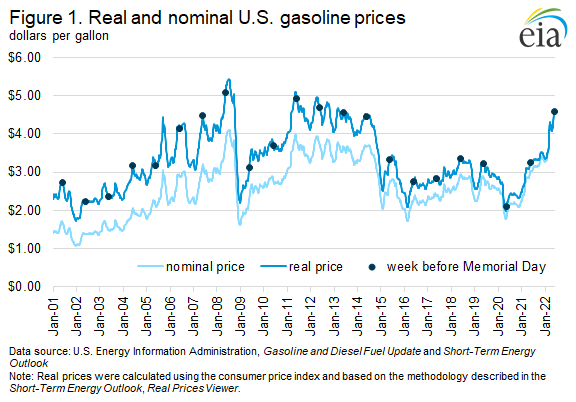 The price of Brent crude oil, the largest component of the price of gasoline, has been rising for two years since hitting a low of $19 per barrel (b) on April 21, 2020, as petroleum demand increased faster than production. Global petroleum production growth has been limited; several OPEC member countries have been unable to increase production in line with previously agreed targets. In the United States, several years of relatively low returns to investors have led some oil companies to prioritize debt reduction, dividend increases, and merger and acquisition opportunities in lieu of aggressive production growth. In a survey from the Federal Reserve Bank of Dallas published on March 23, 2022, 59% of executives cited investor pressure to maintain capital discipline as the primary reason they would restrain production growth despite high oil prices. U.S. energy producers also face labor, material, and equipment shortages, further contributing to slow U.S. crude oil production growth throughout 2021 and into 2022.

At the time of Russia’s full-scale invasion of Ukraine, global petroleum supply and demand balances were already relatively tight, limiting the market’s ability to absorb the potential loss of Russia’s crude oil volumes (including volumes lost due to sanctions). Heightened geopolitical risks have increased oil prices further. From February 23 (the day before Russia’s full-scale invasion of Ukraine began) to May 24, the price of the Brent front-month futures contract increased by $17/b to $110/b.

Demand for gasoline in the United States (measured as product supplied) increased from a low of 5.9 million barrels per day (b/d) in April 2020, early in the COVID-19 pandemic, to 8.6 million b/d in February 2022, the latest monthly data available. Although gasoline demand has not returned to 2019 (pre-pandemic) levels, demand has been within 10% of 2019 levels since March 2021 (Figure 2). Weekly estimates indicate that gasoline demand from March through May 20, 2022, averaged about 6% less than 2019 levels, up significantly from April 2020 when it fell to 38% below 2019 levels. 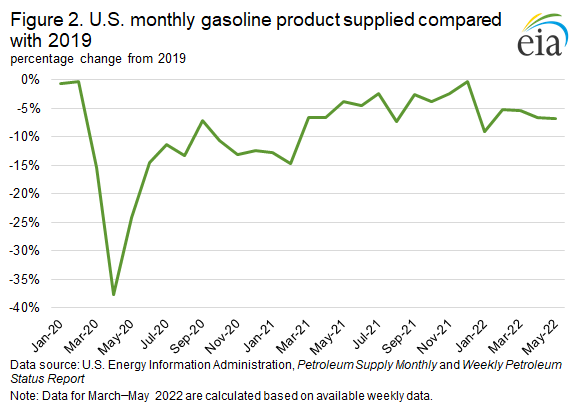 In 2020, gross inputs into U.S. refineries fell to 13.3 million b/d in April, down from 16.7 million b/d in April 2019. With the exception of a major winter storm in February 2021 that forced many Gulf Coast refiners to shut down, gross inputs into refineries have generally increased since 2020 to meet rising demand for petroleum products, including gasoline. Total refining capacity, however, has decreased because of several refinery closures and conversions. As a result of the lower capacity, gross inputs into refineries are only slightly above the five-year (2017–2021) average even though refinery utilization is at the top of the five-year range, indicating that refineries may be running closer to maximum capacity utilization than gross inputs alone would indicate (Figure 3). 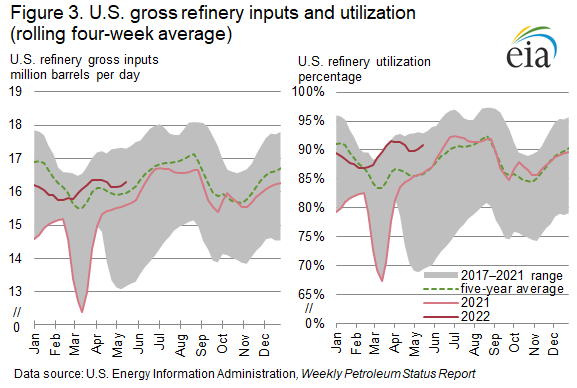 This combination of high crude oil prices and low or falling gasoline inventories is contributing to the high retail gasoline prices heading into Memorial Day weekend. AAA forecasts that despite the high gasoline prices, 34.9 million people will travel 50 miles or more from home this Memorial Day, down 7% from 2019 levels but up 5% from 2021 levels.