Annual financial reports by 119 publicly traded exploration and production companies reported that their aggregate proved reserves of crude oil and natural gas increased by 19.2 billion barrels of oil equivalent (BOE) in 2021. Collective exploration and development (E&D) expenditures by these companies increased only 1% in 2021 from 2020, remaining 28% below their five-year (2015–19) average. Many publicly traded oil and natural gas companies, generating more cash from operations as a result of higher prices in 2021, directed more of their financial resources toward debt reduction, dividend increases, and merger and acquisition opportunities than toward capital expenditures for production growth.

We based this analysis on the published financial reports of 119 domestic and international companies provided to the U.S. Securities and Exchange Commission and collected by Evaluate Energy. Our conclusions cannot be considered representative of the global exploration and production sector as a whole because the analysis does not include private companies that do not publish financial reports. We estimate the 119 companies in this analysis accounted for about 60% of total non-OPEC liquids production in 2021. A list of included companies and their regional distribution is available here.

Of the 119 companies with financial reports we reviewed, the top 20 held 78% of the collective 293 billion BOE in proved oil and natural gas reserves held at the end of 2021. Although many of these companies have global operations, some are national oil companies with reserves and operations concentrated in their home countries including Russia, China, and Brazil. Company assessments of their proved reserves of crude oil and natural gas change from year to year because of revisions to existing reserves from changes in prices, extensions and discoveries of new resources, purchases and sales of proved reserves, and production. Over the course of 2021, the combined proved reserves of the 119 companies we looked at increased by 19.2 billion BOE (Figure 1). 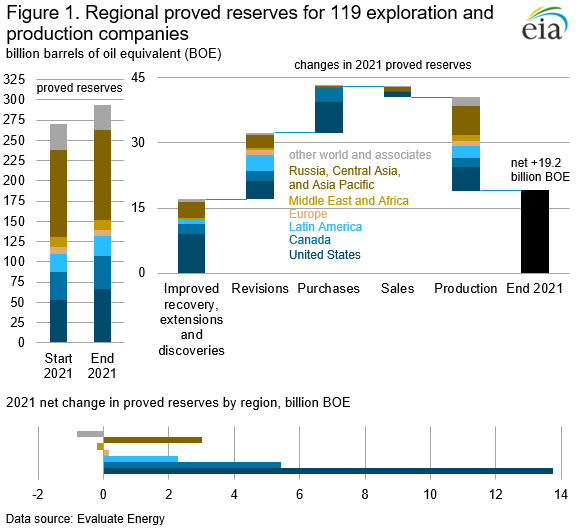 Global E&D costs incurred and unproved reserves acquisitions by these companies in 2021 increased 1% year-over-year to $244 billion (Figure 2). Broken down by regional spending, 38% ($92 billion) was spent by the companies in the United States, 29% ($70 billion) was spent in the Russia, Central Asia, and Asia Pacific region, and 10% ($25 billion) was spent in Latin America. Year-over-year changes in costs incurred varied across regions, increasing by 61% in the United States, 28% in Canada, and 9% in Latin America. For companies operating in the United States, unproved acquisitions spending of over $38 billion, the largest amount in any year from 2012 to 2021, led the increase, as exploration costs and development costs in the United States remained over 40% below the five-year (2015–19) average. Costs incurred in the Russia, Central Asia, and Asia Pacific region declined by 29% due to declining development expenditures in the Asia Pacific region and a large one-time unproved reserve acquisition by Rosneft that created an unusually high aggregate cost number in Russia in 2020. Costs incurred in Europe declined by 13%. 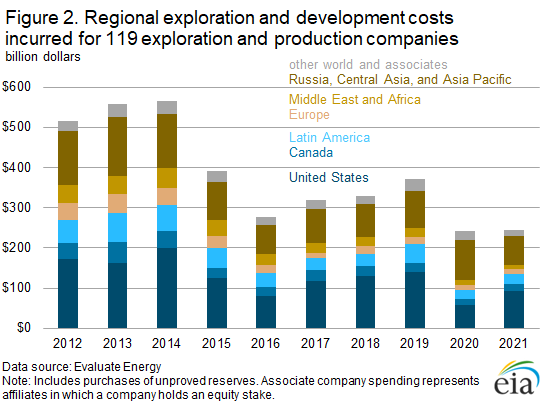 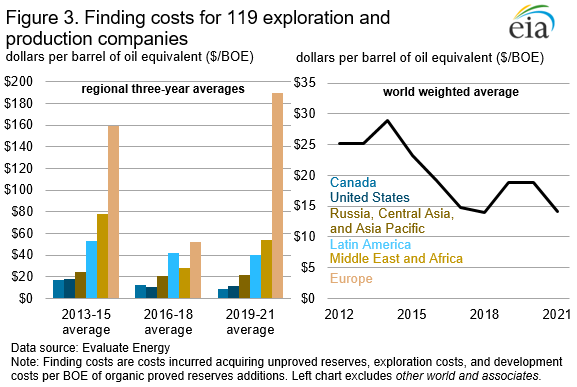 With less capital expenditures devoted to E&D, the publicly traded companies we reviewed devoted more cash from operations toward financing activities such as debt reduction and dividends. Collectively, their cash from operations increased to $597 billion in 2021, the most since 2014 (Figure 4). With higher revenues, the companies focused on paying down debt and increasing dividends, probably to improve their financial position and increase shareholder returns. Net debt held by the companies decreased by $134 billion, the largest amount in any year from 2012 to 2021, and dividends increased to $107 billion (24% above the 2015–19 average). Comments in the Dallas Fed Quarterly Energy Survey suggest public companies were practicing capital discipline in 2021 to meet expectations from their investors. 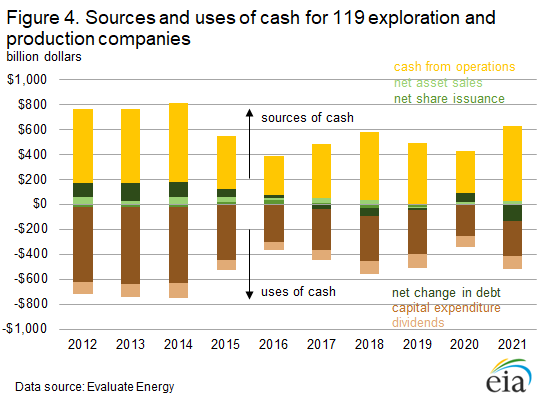 For further analysis on global trends, see our annual Financial Review. In November, we will issue our annual U.S. crude oil and natural gas proved reserves report. This report provides a more robust analysis on proved reserves located in the United States, and includes a larger sample of U.S. producers (publicly traded and privately owned).