EIA forecasts non-OPEC countries other than the United States and Russia to add 0.9 million b/d of liquid fuels supply in 2022 and 0.8 million b/d in 2023 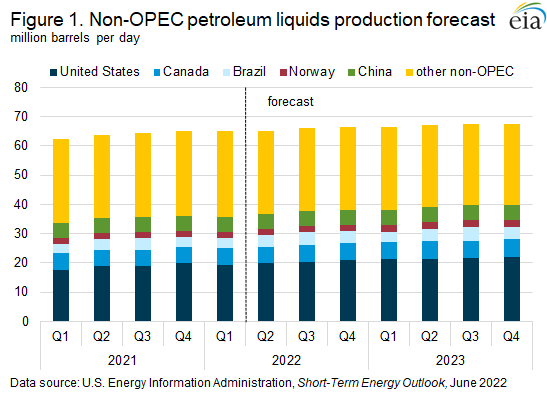 Other than the United States, Brazil has the largest expected liquid fuels production increase of the other non-OPEC countries by the end of 2023 (Figure 2). Our forecast assumes that production from six new floating production storage and offloading (FPSO) units will ramp up through 2023 and continue to drive growth, notably at the Sepia, Mero, and Buzios fields. Once they reach full capacity, these FPSOs will each produce between 70,000 b/d and 180,000 b/d of liquid fuels. We expect Brazil’s production to increase from 3.7 million b/d in 2021 to 3.9 million b/d in 2022 and 4.1 million b/d in 2023. 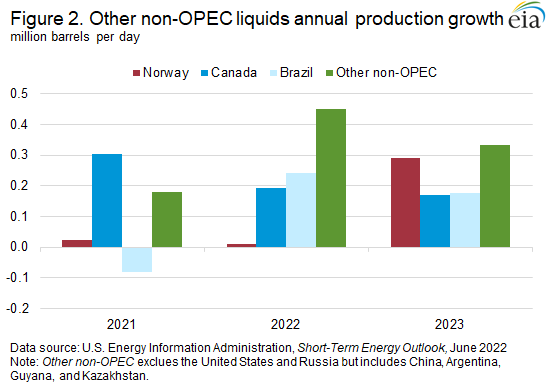 We also forecast that liquid fuels production in Canada will increase by nearly 400,000 b/d, from 5.5 million b/d in 2021 to 5.9 million b/d by 2023. Canada’s growth is driven primarily by oil sands expansion and debottlenecking projects in 2022 and 2023 following the expansion of the Enbridge Line 3 crude oil pipeline (with a capacity of 760,000 b/d), which became operational in October 2021. The TransMountain pipeline expansion project (with a capacity of 890,000 b/d) is slated to enter service at the end of 2022. Additional Enbridge expansions and optimizations to its existing pipeline system, if completed, will add more than 400,000 b/d of export capacity over the forecast period. Due to this new pipeline capacity from Enbridge and other planned pipeline expansions, currently identifiable constraints on oil exports from Canada will be lessened by the end of 2023.

We forecast that liquid fuels production in Norway will remain mostly flat in 2022, but we expect it to increase by 0.3 million b/d in 2023 in large part because of the completion of phase 2 of the Johan Sverdrup expansion project. The first phase of production came online in October 2019, producing 511,000 b/d of crude oil on average in 2021, with maximum production rates at 538,000 b/d as of February 2022. The second phase is scheduled to come online in the fourth quarter of 2022, and the combined production of both phases is expected to reach 720,000 b/d at full capacity (60,000 b/d more than originally expected). As a result, we expect that liquid fuels production in Norway will increase from an average of just over 2.0 million b/d in 2021 to 2.3 million b/d by 2023. Since June 2020, tax stimulus programs for the oil and natural gas sector enacted by the Norwegian Parliament have accelerated activity for new plans for development and operation around existing oil infrastructure, which has the potential to further expand Norwegian oil production capacity after 2023.