U.S. exports of crude oil and petroleum products reached a record of 9.8 million barrels per day (b/d) during the week of May 27 (based on a four-week rolling average). High exports of hydrocarbon gas liquids, such as ethane and propane, are contributing to record crude oil and petroleum product exports. Weekly data indicate that U.S. exports of propane are near record highs, and U.S. exports of other oils (which includes ethane) reached a record of 2.4 million b/d during the week of June 3. Exports of crude oil, finished motor gasoline, and distillate have all increased since the beginning of 2022, partly due to increased demand from Europe, although they all remain below their record highs (Figure 1). In addition to high exports, movements from the U.S. Gulf Coast to the U.S. East Coast via pipeline, tanker, and barge are near historic annual high levels for both motor gasoline and distillate. Despite this supply, low product inventories in the Northeast are likely to continue, driven by a confluence of factors, including transportation constraints, increasing demand, and low regional refinery production. 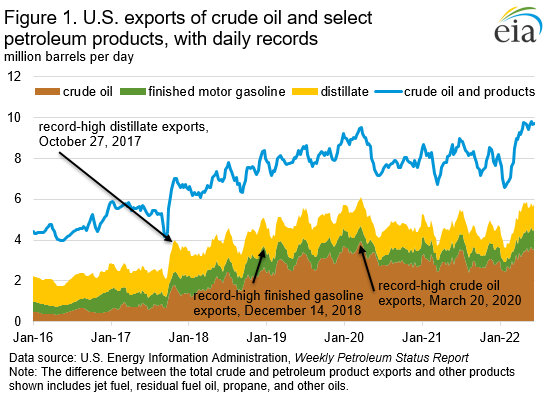 The Gulf Coast is home to more than half of the refining capacity in the United States and produces more gasoline and distillate fuel than it uses. From the Gulf Coast, petroleum products can be shipped to other regions in the United States or exported to other countries. In contrast, the U.S. East Coast has comparatively little refining capacity, but it is often the region with the most gasoline consumption. Because of this dynamic, the East Coast relies on shipments of fuel from other regions of the United States, predominantly the Gulf Coast, as well as imports from other countries.

Transportation fuels markets in the Gulf Coast and East Coast are linked primarily by the 2.5 million b/d Colonial Pipeline and by the 720,000 b/d Products (SE) Pipeline (formerly known as the Plantation Pipeline). The Colonial Pipeline typically operates at or near capacity and often needs to allocate, or limit, space on its pipeline system. Allocations occur when demand to ship petroleum products on a pipeline exceed the pipeline’s capacity. Allocations are a frequent occurrence on the Colonial Pipeline system due to strong demand for shipping petroleum products from the Gulf Coast to the East Coast. Trade press reports indicate that Line 2 of the Colonial Pipeline system (which is used to move distillate fuel from Houston, Texas, to Greensboro, North Carolina) was unallocated around early May. However, interregional pipeline movement was near the previous five-year (2017–21) average earlier this year. From January through March 2022, pipeline shipments of distillate from the Gulf Coast (PADD 3) to the East Coast (PADD 1) were up by 3% compared with the previous five-year average, and shipments of gasoline over the same period were up by 2% (Figure 2). 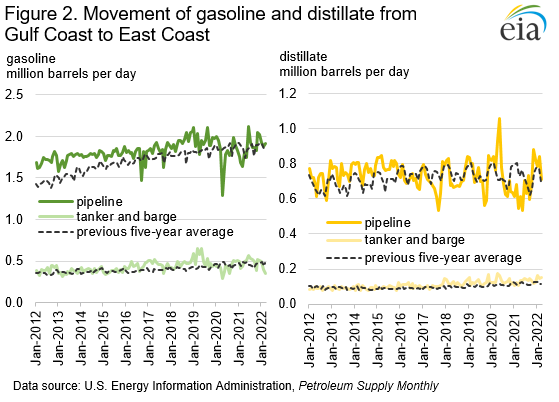 Recent trade press reports indicate that in mid-May the Colonial Pipeline announced allocations of distillate for several cycles, indicating that demand to ship distillate to the East Coast exceeded the pipeline’s capacity. Despite the recent increase in shipping demand, pipeline space is limited, and both gasoline and distillate pipeline shipments from the Gulf Coast to the East Coast are exceeding their previous five-year average.

In addition to shipments from other U.S. regions, the East Coast imports gasoline and distillate from other countries. Gasoline imports into the East Coast have been steadily increasing since February, when the four-week rolling average for imports was 343,000 b/d the week of February 4 (140,000 b/d less than the previous five-year average). East Coast gasoline imports have since climbed to 790,000 b/d as of June 10 (138,000 b/d more than the previous five-year average). Imports of distillate fuel into the East Coast have followed normal seasonal trends, dropping sharply during March and April. Beginning the week of May 27, however, weekly imports into the East Coast have increased. For the week of June 10, East Coast distillate imports averaged 129,000 b/d, up from 66,000 b/d the week of May 20 and nearly equal to the previous five-year average (Figure 3). Although East Coast imports of gasoline and distillate have increased, the most recent round of EU sanctions against Russia, including a ban of 90% of oil imports, may further increase Europe’s demand for refined products and put additional pressure on fuel supply in the Atlantic Basin, limiting this avenue for East Coast supplies. 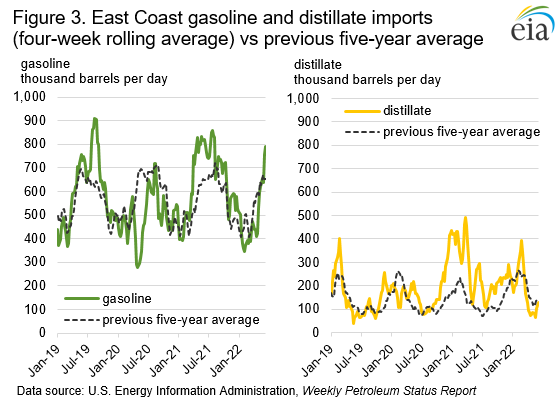 Although interregional shipments and imports appear to be relatively strong or increasing, demand growth and limited refining capacity in the East Coast will likely contribute to product inventories remaining relatively low. In April 2020, East Coast gasoline demand (measured as product supplied) fell to 2.1 million b/d, 40% below April 2019 consumption. East Coast gasoline demand has since increased. In 2021, it averaged 3.1 million b/d, 6% less than in 2019. The latest gasoline demand data available for the East Coast indicate that March product supplied averaged 13% below 2019 levels, but weekly data for the United States (we do not collect regional data on a weekly basis) indicate that gasoline consumption has trended upwards since the week of March 25.

Since 2017, refinery capacity in the East Coast has fallen from 1.2 million b/d to 0.8 million b/d, limiting the region’s gasoline and distillate production. Furthermore, East Coast refineries were running at more than 98% utilization for the week ending June 10, leaving little room for additional refinery runs. In our June Short-Term Energy Outlook, we forecast that East Coast gasoline and distillate inventories will remain below their 2017–2021 averages through December 2023, in part because of reduced refining capacity in the region.

The ability to increase maritime movement of petroleum between regions within the United States is limited by the number of coastwise compliant ships. In the United States, goods or passengers moved in U.S. coastal waters between U.S. ports must be carried on U.S. flagged ships that are constructed in the United States and owned and crewed by U.S. citizens. In certain situations these regulations may be waived, but these situations are rare. Shipping from the U.S. Gulf Coast to the East Coast is typically more expensive than shipping on similar international routes. However, recent trade press reports indicate that shipping rates from the U.S. Gulf Coast to the eastern coast of Canada have surpassed rates from the U.S. Gulf Coast to New York Harbor, reflecting the strong international demand for petroleum products from the United States. If relatively high prices for international shipping routes persist, it may limit interest in intra-U.S. routes, even if regulations on using foreign-flagged vessels were waived.